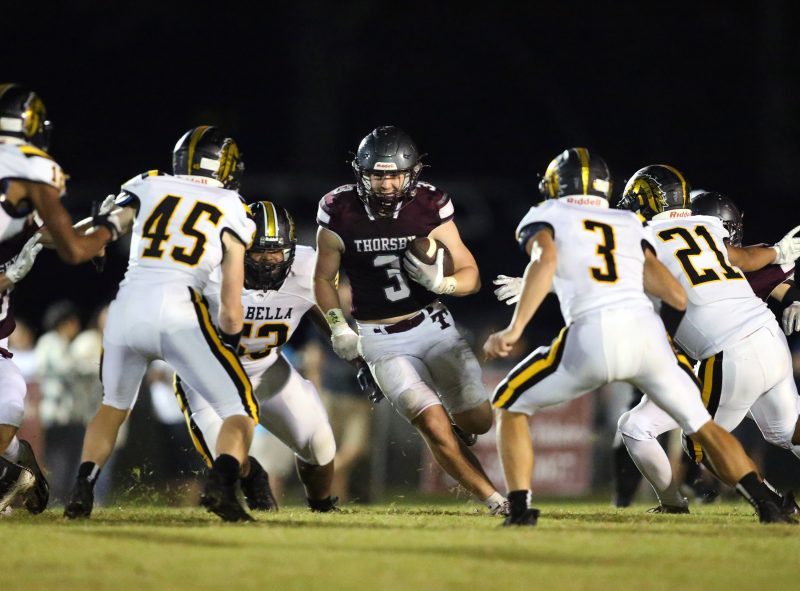 Thorsby travels to Luverne in week nine for a big regional matchup. (FILE)

That is all that is left in the 2021 regular season, and the playoff races are getting interesting.

Here is who each Chilton County team will match up with in week nine.

The Rebels are currently riding a two-game winning streak while Luverne has yet to lose a game this season.

Thorsby is coming off a 54-0 victory over Central Coosa, and will have to face a Tigers team that has given up just 19 points all season.

It will be a challenge for a Rebels offense that is averaging over 37 points per game.

Thorsby’s defense will also have its hands full. While the unit has had a very strong season, giving up 10 points per game, the Rebels will see a Tigers offense that has been nothing short of sensational thus far this season. Luverne is scoring just under 46 points per game this season.

Maplesville High School travels to Verbena High School this week in an important regional matchup. The in-county foes are both still fighting for playoff positioning, and a win in this game would be an important step for each.

Maplesville is coming off a massive 27-0 victory over Notasulga High School in week eight. The Red Devils dominated on both sides of the ball, keeping their perfect season intact.

Verbena on the other hand is currently riding a two-game losing streak. After jumping out to a hot 4-2 start, these Red Devils have struggled to find their footing in the last couple of weeks, most recently falling to Loachapoka by a score of 42-20.

Chilton County High School travels to Benjamin Russell High School this week in search of its third win of the season. Both teams have struggled in recent weeks and are looking to get back into the win column.

After a strong effort against Helena in week seven, CCHS was unable to pick up an important win in Wetumpka in week eight.

Benjamin Russell won its first game of the season in week seven over Smiths Station High School, but they were not able to carry over the momentum in week eight, falling to Pelham High School by a score of 20-14.

Both teams are still searching for their first regional wins of the season.

Isabella travels to Central Coosa this week looking to extend its current winning streak to six games. The Mustangs have been rolling since its 0-2 start at the beginning of the season, and they will try to keep up their winning ways in this regional matchup.

Central Coosa has had its share of struggles thus far this season, stumbling its way to an 0-6 start. The Cougars have had little success on either side of the ball, averaging just over nine points per game on offense and giving up over 50 points per game on defense.

The Panthers will need to break that trend if they hope to finally pick up their first win of the year.

After starting out 1-5 this season, Billingsley High School will look to continue its late surge this week as they take on Barbour County High School.

The Bears have won two games in a row, and have an opportunity to make it three against a Barbour County team that has played poorly for much of this season.

The Jaguars have been shut out in five of the six games they have played this season, with two of their games being decided for a forfeit, including their only win of the season.

Billingsley, meanwhile, has caught fire. The Bears ended a five-game losing streak in week seven with a victory over Verbena High School, then picked up a big win over Autaugaville in week eight.

In those two wins, the Bears averaged 41 points on offense and gave up an average of 10.5 points on defense.

If they continue to perform like that this week, the Bears will end up with their third straight win.