Athlete of the week: Jackson explodes in big Maplesville victory 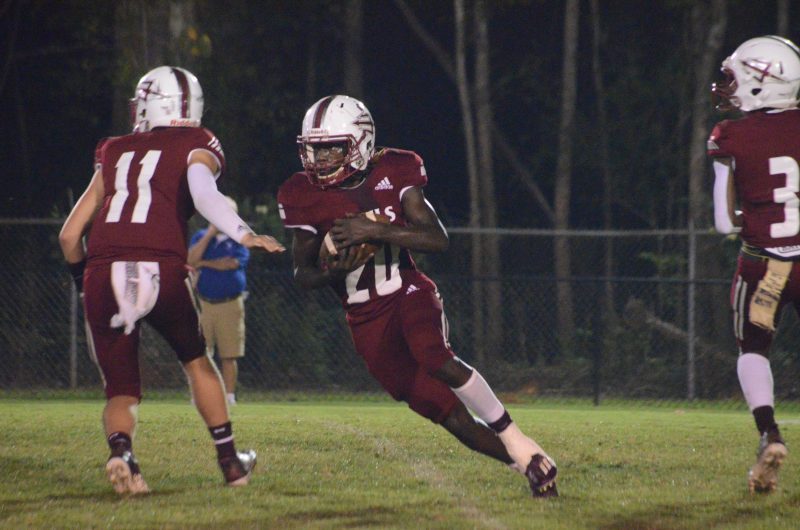 Jakavion Jackson had an outstanding game for the Red Devils in their win over Notasulga High School on Oct. 8. Jackson scored two touchdowns from 80 and 81 yards out. (ZACHARY SEIFTER/ ADVERTISER)

Maplesville’s Jakavion Jackson is this week’s athlete of the week thanks to a superb game against Notasulga High School on Oct. 8.

Jackson played a pivotal role in the 27-0 victory. He led the team in rushing, picking up 216 yards off just 10 carries, averaging an outrageous 21.6 yards per rush. He also scored two of the Red Devils’ four touchdowns in the game.

Each of Jackson’s touchdowns were on explosive plays in which he beat the defense with his speed. His first touchdown came in the first half, as he took a run to the outside and went 80 yards for the score. His second touchdown was very similar, as he took the ball 81 yards to the end zone for the Red Devils.

Braxden Giles also had an incredible performance this week, helping the Mustangs to a 79-6 victory in their Homecoming game.

In the win, Giles had a limited number of touches. However, he was able to amass 222 all-purpose yards and three touchdowns for Isabella.

Giles was able to contribute in a number of different ways as well. He picked up 96 yards and a score in the rushing game off two carries, added 41 yards receiving and another touchdown, and even had an 85-yard kickoff return for a touchdown.