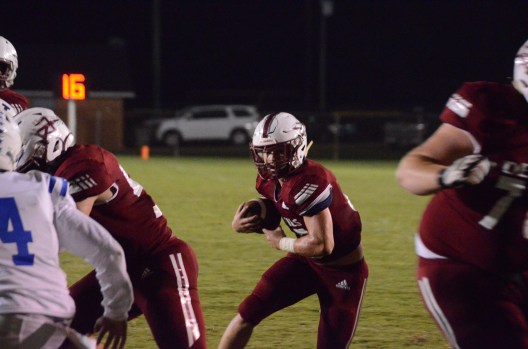 Maplesville running back Brady Harrison rushes into the end zone for a touchdown. (ZACHARY SEIFTER/ ADVERTISER) 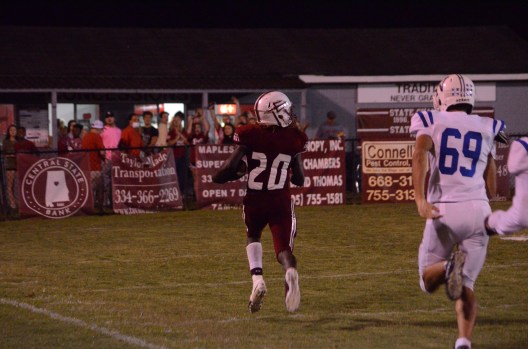 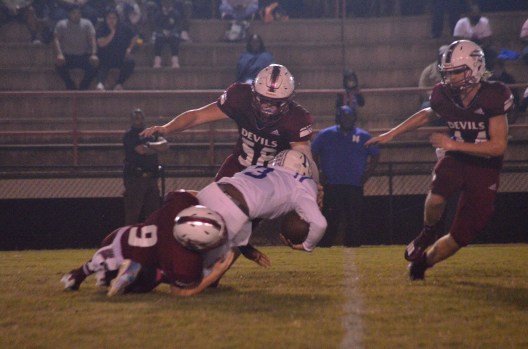 The Maplesville defense shutout Notasulga on Oct. 8. It was Maplesville’s fourth shutout of the season. (ZACHARY SEIFTER/ ADVERTISER) 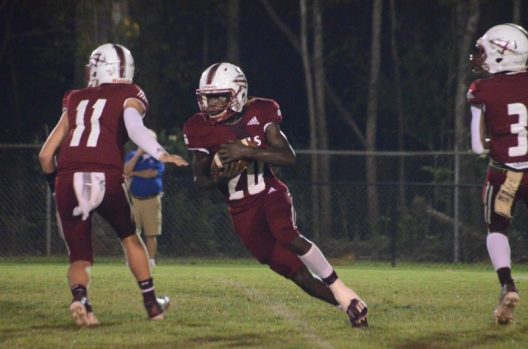 Jakavion Jackson had a big night for the Red Devils, scoring two long rushing touchdowns of 80 and 81 yards in the 27-0 victory. (ZACHARY SEIFTER/ ADVERTISER)

Maplesville High School picked up a huge regional win over Notasulga High School on Oct. 8. The Red Devils shutout the Blue Devils 27-0, the fourth time the Maplesville defense has recorded a shutout this season.

Coming into the game, both teams had a perfect 6-0 record. Maplesville was the only team to come out of the game with its perfect season intact though, and the Red Devils have put themselves in the driver’s seat to win a regional championship this season.

Both defenses got off to great starts, as each offense was forced to punt on its first possession. However, a Notasulga fumble set up Maplesville’s offense deep in Blue Devils territory. It took seven plays, but the Red Devils got on the scoreboard early in the second quarter on a one-yard touchdown run by Brady Harrison, taking a 7-0 lead.

For the rest of the game, the Red Devils dominated. They won most of the battles on the line of scrimmage on both sides of the ball.

The offensive line was particularly great, leading the way for a punishing run game that racked up over 400 yards and four touchdowns.

“Our offensive line, Tre’von Blackmon, Hayden Lawley, Cole Gray, Mason Poe and Adolphus Harris, is the key to our offense,” Maplesville head coach Brad Abbott said. “… And Austin Johnson because we bring him in when we go heavy set … those six guys are the reason we are where we’re at.”

While the Maplesville ground game shined, the defense was equally as impressive, shutting out a Notasulga offense that had been averaging over 34 points per game this season.

The Blue Devils put together a few threatening drives in the game, including a drive in the fourth quarter that reached the Maplesville one-yard line. However, the Red Devils defense made a stand each time, preserving a shutout that they desperately wanted.

“They just never gave up,” Abbott said of his defense. “They took a lot of pride in keeping that zero on that board tonight. I was really proud of the defense.”

While the win puts Maplesville in a great spot in the standings, the Red Devils still have three games left to play this season.

They will hit the road next week, traveling to Verbena for an in-county regional game. It will be their second-to-last regional game of the season.