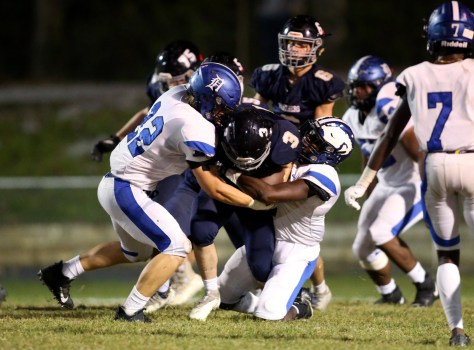 Matt Brasher scored the Panthers’ only touchdown of the night on a 38-yard run late in the first half. (BRANDON SUMRALL/ SPECIAL) 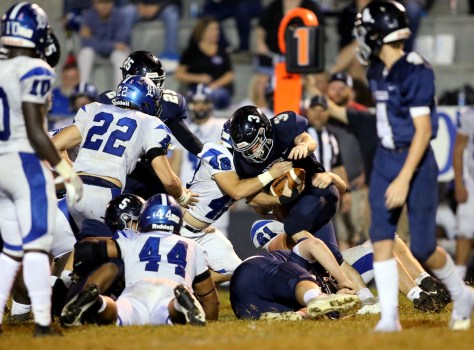 Jemison fell to Demopolis for its seventh loss of the season on Oct. 8. (BRANDON SUMRALL/ SPECIAL) 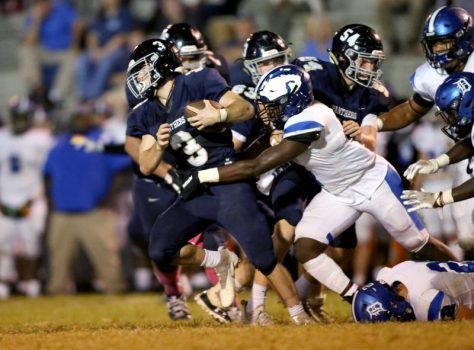 Jemison running back Matthew Brasher is brought down by the Tigers defense. (BRANDON SUMRALL/ SPECIAL)

The long, tough football season for the Jemison Panthers continued on Friday night as the visiting Demopolis Tigers took down the Panthers on Homecoming by a score of 59-7.

The Tigers wasted no time on offense during the first quarter, scoring on each and every possession during the period, putting Jemison in a mighty hole after one quarter of play.

The trend continued in the second quarter as Tigers running back Kelvin Rowser added another Demopolis touchdown on a 42-yard touchdown carry, putting the Tigers up 33-0 early in the second period of play.

Five plays later, a 37-yard touchdown pass to Drew Seymore gave the Tigers a 40-0 lead with 6:49 remaining in the first half.

The Demopolis offense was not done for the first half, however, as they tacked on one more touchdown with 4:25 to play. Vincent Deas hauled in the touchdown reception from 48 yards out to make it 46-0 in favor of the Tigers.

The ensuing possession for the Panthers saw them score their only points of the night when running back Matthew Brasher broke loose for a 38-yard touchdown, cutting the Tigers’ lead to 46-7 at the half.

The second half of the contest was relatively quiet, as a pair of Tigers touchdowns in the third quarter brought the game to its final score of 59-7.