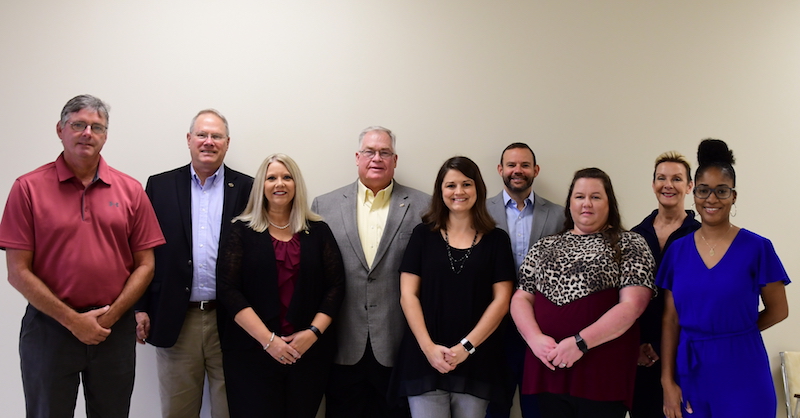 Cawaco Resource Conservation & Development recognized Chilton County grant projects that were nearing completion this year during a meeting on Oct. 5.

The grants to the Chilton County Commission were for high-quality picnic tables for Minooka Park and repairs to community story shelters.

Gerald Arrington, Minnoka Park manager, said the picnic tables were for the pavilion near the bathhouse and playground.

“They get used every single weekend,” Arrington said.

He said the park was “very thankful” for the $6,000 it received from Cawaco.

Renovations in recent years have led to more RV camping at the park than ever before.

“We stay booked over the weekend, especially this time of year,” Arrington said.

He said the COVID-19 pandemic brought several campers because it was a way for people to safely get out and do something. He said there have been several visitors from other states.

State Senator April Weaver commended Arrington on everything he has led to further develop and improve the park over the years.

Weaver also thanked RC&D for being a good community partner.

“Any experience that I have had with any of the RC&D programs has just been extremely good, and I certainly appreciate the partnership and the ability to go to (you) and say we really have a need,” State Rep. Van Smith said.

Smith recounted the first time he had helped connect someone with Cawaco for a storm shelter in the New Convert Community.

This time around, the county received $30,000 for the storm shelter improvements.

Cawaco programs manager Patti Pennington said the FarmBot grant was one of her favorites. This grant gave $10,000 for the purchase of a “robotic type garden bed” to be used by Landon Lowery’s class at LCTC.

“It waters it robotically,” Pennington said. “It is supposed to take the soil temperature and the moisture content, and it is specifically made for schools.”

It can help students learn about the technology and become more interested in the advances in agriculture. The garden bed can be monitored from a smart phone and water turned on through an app.

The IDA received $10,000 toward the broadband internet feasibility study that it contracted with Sain Associates to complete. An executive summary from the study was released in May outlining unserved and underserved areas of the county and potential ways to increase broadband access.

Drayton Cosby with the Alabama Association of RC&D Councils said Cawaco RC&D handles the management of grants for a number of funding organizations. However, funding allocated by the state legislature is a large portion of the grant money Cawaco RC&D has available.

“The state has been funding RC&D for over 22 years now,” Cosby said. “They have allowed us to grow as the economy has gotten better, they have certainly been trying to get funds back into the districts.”

A volunteer board determines which grant applications will be funded.