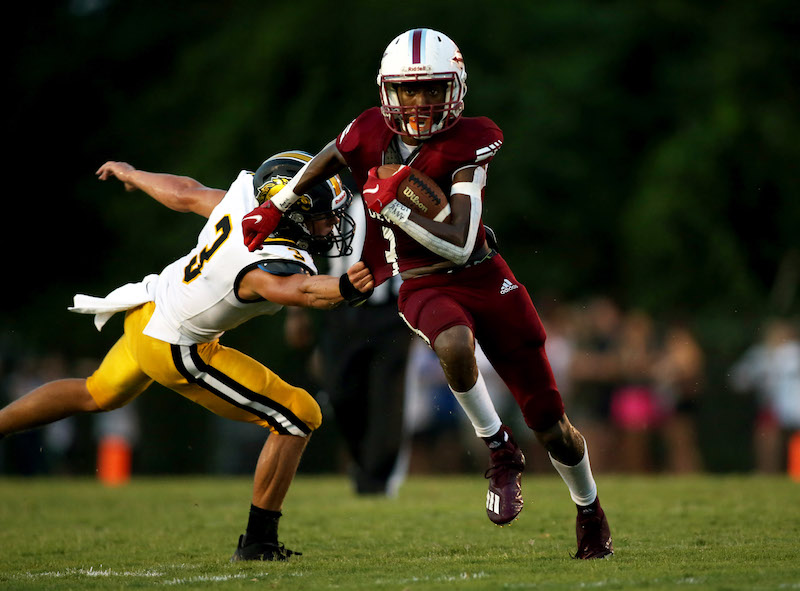 Maplesville hosts Notasulga High School this week in a game that will most likely serve as a regional championship game. (FILE)

The 2021 regular season is now in the final stretch. With just four weeks to go, teams are preparing to make their playoff push, while others are getting ready to wrap things up and look towards next season.

Maplesville High School hosts Notasulga High School this week in a battle of undefeated powerhouses. Both teams come into the game with a 6-0 record.

This game should be viewed as a regional championship game, because whoever wins will most likely come away with the best record in the region in the regular season.

Maplesvile won this matchup a season ago, pulling out a 27-21 victory on the road over the Blue Devils.

Now, the Red Devils will play host to this matchup, and it has all the makings of another great contest.

Chilton County High School hits the road once again this week for a regional matchup against Wetumpka. This game comes off the heels of a sensational effort for the Tigers, who fell short against the undefeated Helena Huskies in week seven, losing 48-40.

Despite the loss, the effort from the Tigers is an encouraging sign of the progress being made by the team.

In recent weeks, the passing offense for CCHS has found a spark. They got things going in the team’s loss to Stanhope Elmore, and it carried over into their win over Shelby County. In week seven, the passing offense exploded, accounting for nearly 400 yards and three scores.

They will need it to be effective once again, as they will face off against a Wetumpka defense that is giving up just over 21 points per game.

Thorsby hosts Central Coosa this week in its Homecoming game. It is an important game as the Rebels are looking to start their playoff push with four games remaining.

Thorsby, meanwhile, has been strong on both sides of the ball for much of the season. Behind a stout rushing attack, the Rebels have averaged 28.5 points per game this year. On defense, they have given up 10 points per game and have two shutouts.

If Central Coosa cannot get things going on offense early in this game, Thorsby may run away with it and claim its fifth win of the season.

For their Homecoming matchup, the Mustangs face Calhoun High School this week.

The Tigers have taken the field for five of their six losses, with one coming by forfeit due to COVID-19 issues. In three of those five losses, they have been shutout.

On offense, they are averaging four points per game in the five games they have actually played.

On defense, they are giving up an average of 45 points per game.

That bodes well for an Isabella team that is currently riding a four-game winning streak.

The Mustangs have been excellent on both sides of the ball. They are averaging 31 points per game on offense while giving up an average of 19 points per game.

Should they continue to have that kind of success on both sides of the ball, the Mustangs will increase their win streak to five games.

Verbena High School will look to get back to its winning ways this week as the Red Devils hit the road to face Loachapoka High School.

This matchup is a big one, as each is pushing to rack up regional wins in the final stretch of the season to qualify for the playoffs.

The Red Devils struggled in week seven, falling at home in a lopsided loss to Billingsley. Loachapoka is also coming off a loss, falling to Notasulga 32-12 in week seven.

Both will try to bounce back and keep themselves relevant in the playoff race.

Jemison High School will host Demopolis in its Homecoming game this week.

The Panthers will once again look to get their first win of the season, as they host a Tigers team that is coming off a close loss to Jasper High School in week seven.

For Jemison, they key to a victory will be stopping the Tigers’ offense, a unit that has averaged just under 38 points per game this season.

It will be a test for a Panthers defense that has had its struggles in 2021. The Jemison defense has given up just under 39 points per game this season.

Coming off its first win since week one, Billingsley High School will be faced with a tough task at home in week eight, squaring off against an Autaugaville team that is currently riding a three-game winning streak.

The Bears are coming off their best performance of the season, earning a win on the road over Verbena by a score of 47-8.

Billingsley’s offense, which has struggled for much of the season, finally came to life and was able to capitalize off some Red Devils turnovers to put points on the board.

The Bears will need their offense to keep it up, as Autaugaville’s defense is giving up an average of just over 10 points per game this season.