Churches come together for joint service and fun 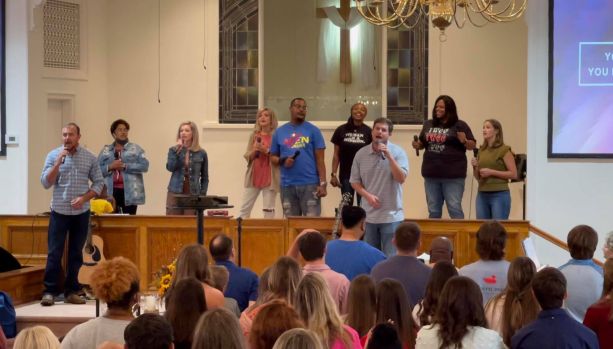 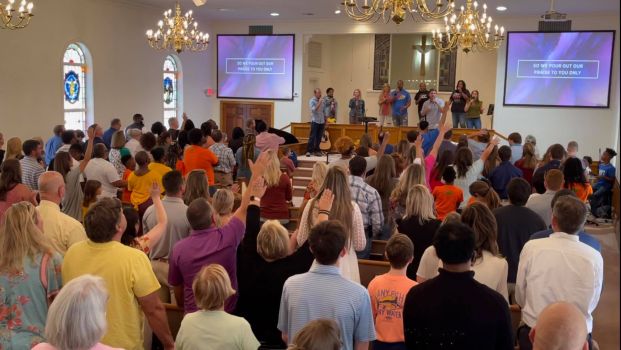 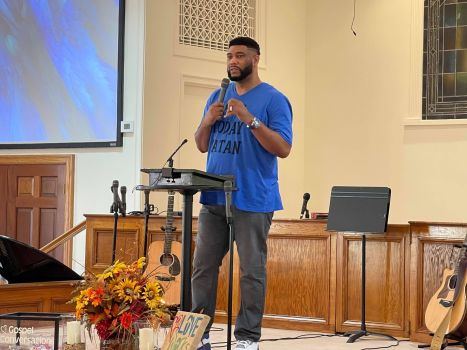 A developing friendship between local pastors led to a special service on Sept. 26.

Thorsby First Baptist Church, a predominately white church, and The Word Christian Center, a predominately black church, came together for a combined service where both praise teams and lead pastors participated.

“The joint service was awesome,” Pastor Orlando Weeks said. “It was an awesome day for the kingdom … Once we got there, the hospitality was just awesome.”

The combined choir sang “Great Are You Lord” to close out the service.

“As a congregation, people from … different backgrounds, different races are crying out to God together,” Hodges said. “That was a powerful moment.”

Hodges said this a snapshot of what heaven will be like as described in Revelations 7:9, “people from every tribe and nation gathered around the throne … crying out with one voice salvation belong to our God.”

“I am a total believer in, ‘What if we were color blind, and we saw people the way God sees us,” Weeks said. “So to see that come together and to just see children of God, not a race but children of God — that makes my heart leap with joy.”

While it cannot be fully confirmed, Caton said this could be the first time an African-American has spoke from the pulpit at Thorsby Baptist, and if not the first time, it has been rare.

“Having Pastor Orlando stand in our pulpit and give a word was incredible,” Caton said.

“It was one of those services that when you try to describe it, it is hard to describe,” Caton said.

The service was followed by a time of fun with volleyball, other outdoor activities, video games and food with people from both churches mingling, talking, laughing and competing.

Hodges said it was good to see people from each of the churches interacting with each other and getting to know each other during the meal and activities.

“It was just awesome to see the two churches coming together at such a time as this to lift the Savior up,” Weeks said.

Watching news coverage that continually focused on racial division in 2020 led Caton to research ways he could be a part of making things better.

“We knew we needed to talk to someone about what would this even look like,” Caton said.

The couple turned to searching the internet for a predominately African-American church in Thorsby that they could contact about possible partnerships and support.

The Word Christian Center came up as a result.

Caton said he wanted to talk to Weeks and see how he might be a part of helping those who were hurting during the heightened racial division.

“When we met pastor Orlando, the first thing that stood out to me was (he is a) peace maker,” Caton said. “He is all about the Gospel, and he is all about grace and truth.”

The two met for lunch.

“It was one of the best conversations that I have ever had,” Caton said.

They went on to partner in establishing an after-school program, Open Door Ministries. The program met once a week at The Word Christian Center and provided tutoring, fun, a Bible lesson and a meal at no charge to the families. The program grew to the point that it needed to be moved to Thorsby First Baptist with about 15 students.

Weeks said students in the program achieved better grades as a result.

The churches also partnered for fundraisers to keep the program going.

The program ended after a year when Chilton County Schools established a free after-school program.

“The friendship is still there,” Caton said of him and Weeks.

Weeks invited Caton to speak at The Word Christian Center, then Caton introduced Weeks to Hodges.

“The connection is there, and God has been getting the glory out of it,” Weeks said.

The pastors started talking about creating an opportunity for the youth of both churches to be able to get together, which grew into the joint service and fellowship time.

The churches hope to have more joint events in the future.

“We are trying to figure out how to encourage them, how do they fuel us to keep going, how do we fuel them,” Hodges said. “How do we continue to build those relationships?”

Prior to the COVID-19 pandemic, The Word Christian Center had tried to have events with other churches on a semi-regular basis.

“But we had never per se done it the way people look at it as a black and white church coming together that (with Thorsby Baptist) was our first time doing that type of fellowship, and it is much needed in a time like this,” Weeks said.

He said the combined service was the result of the pastors involved being obedient to what they felt God was saying.