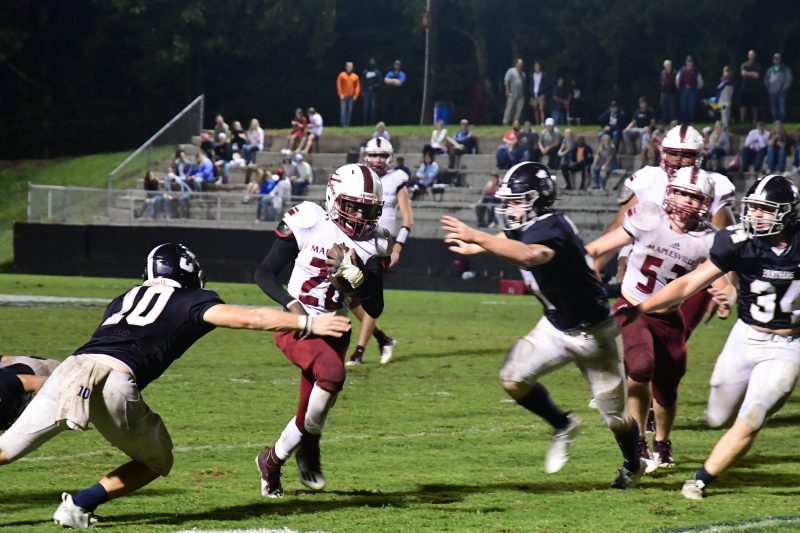 Maplesville hosts Jemison in what should be a very exciting rivalry game. The Red Devils beat the Panthers in 2020 by a score of 24-17. (FILE)

The 2021 football season is officially approaching the halfway mark.

Halfway through the season, every team at this point understands where they are and what their goals should be in the second half of the year.

This week, Jemison High School travels to Maplesville High School in the only in-county clash of the week.

These teams have gone in complete opposite directions since kicking off the season.

The Red Devils got off to a good start, and they have only gotten better as the season has gone on. They have not allowed a point in a game since beating Isabella High School 28-21 in week two. The offense is averaging nearly 40 points per game.

They will try to fix that this week. The offense was finally able to get some momentum in week five, scoring 28 points in a regional game against Sipsey Valley. They hope to keep that going this week, and avenge a 24-17 loss to Maplesville a year ago.

The loss for the Bears was their fourth straight. They will try to get back in the win column this week against an Isabella team that is riding a two-game win streak.

To do so, they will need to get things going on offense. The offense has been a concern for Billingsley this season as they have scored just under eight points per game in their five contests this season.

Isabella on the other hand had been brilliant in its two wins before the bye week. The Mustangs obliterated Francis Marion by a score of 62-8 before winning a tight contest over Thorsby High School in week four.

CCHS will host Shelby County this week in the school’s homecoming game. Each team is coming off a week five loss and will try to get back into the win column this week.

The Tigers are coming off a loss in their home opener to Stanhope Elmore. CCHS kept the game close in the first half, competing well against the Mustangs. They could not replicate that performance in the second half though, falling behind before ultimately losing 34-13.

Shelby County is coming off a loss in a game that was never particularly close. The Wildcats fell to Demopolis by a score of 53-7.

CCHS has had its struggles on the offensive side of the ball this season. Outside of a 40-point performance against Jemison in week two, the Tigers have scored an average of under seven points in its three other games.

That will need to change if they want to end their current two-game losing skid.

Verbena High School will also be hosting its homecoming game this weekend as the Red Devils take on Calhoun High School.

This game will be one to monitor as the weekend gets closer. A week ago, Calhoun had to forfeit its game against Thorsby due to COVID-19 issues. Should those issues persist, the Tigers may be forced to forfeit once again this week against Verbena.

While the Tigers did not play in week five, the Red Devils did, winning big at Barbour County 52-0.

The win came off the heels of a disappointing loss to Autaugaville in week four. The Red Devils ran the ball efficiently while smothering the Jaguars’ offense to get back in the win column for the third time this season.

They will hope to replicate that success in week six and try to put together back-to-back wins for the first time this season.

Thorsby High School got a win and some rest in week five. The Rebels’ opponent, Calhoun High School, had to forfeit due to COVID-19 issues, giving Thorsby a victory.

Now, Thorsby is well rested going into its matchup against Prattville Christian Academy, and will look to improve its record to 4-1.

PCA’s one win came from a forfeit by Ellwood Christian in week two. In the four games they have played, the Panthers have given up over 36 points per game.

That bodes well for a Thorsby offense that has found success in 2021. The Rebels averaged 36 points per game in the three games they played before the forfeit win.

On defense, Thorsby is giving up just over nine points per game and has posted two shutouts so far this season.

That trend should continue, as PCA has struggled on offense, scoring an average of under six points per game in the four contests they have played in.