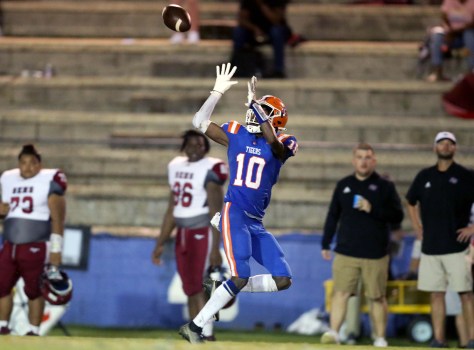 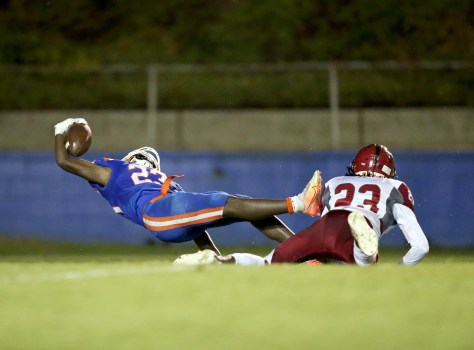 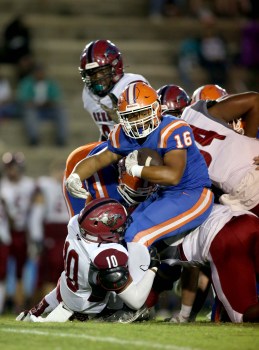 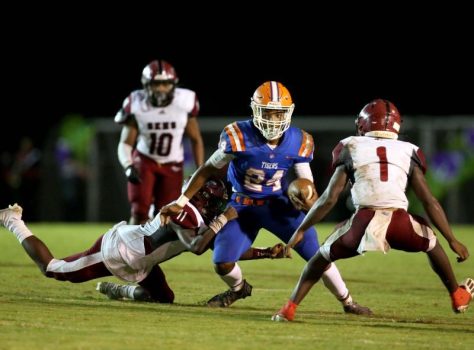 The start of the 2021 season has been a tough one for Chilton County High School. A 34-13 loss to Stanhope Elmore High School on Sept. 17 dropped the Tigers’ record to 1-3 in the team’s home opener.

Both teams had a bit of trouble getting the offense moving with their opening possessions. The Tigers that had the first shot at putting points on the board with their second possession of the night. Facing a fourth and ten at the Stanhope 25-yard line, CCHS lined up for a 42-yard field goal attempt. Unfortunately for Chilton County, the attempt was blocked and scooped up by the Mustangs and returned to the Tigers’ five-yard-line. One play later, the Mustangs took an early 7-0 lead.

After another round of scoreless possessions by both squads, the first quarter came to an end with the Mustangs leading 7-0.

Stanhope Elmore’s second possession of the second quarter saw the evenings first turnover as Mustangs quarterback Jacob Bryant was be picked off by Jakeveon Bolding who then returned the ball out near midfield. One play later, CCHS quarterback Cannon Miller connected with Bolding for a 52-yard touchdown strike to tie the game with 6:54 remaining in the half.

The ensuing possession by the Mustangs came to an abrupt end as Bryant once again was intercepted by Bolding. This time, however, the Tigers were unable to capitalize, keeping the game tied going into halftime.

The tie did not last long into the second half as the Mustangs used their first possession of the half to march 65-yards, with a 18-yard touchdown pass from Bryant to Patrick Williams putting Stanhope Elmore in front, 14-7.

Things went from bad to worse for CCHS. On their ensuing possession, a fourth and seven play at their own 33-yard line resulted in a snap from the center flying over the head of punter Austin Cooedy and into the endzone, where it was recovered by a Mustang for another Stanhope Elmore touchdown.

A quick three-and-out by Chilton County gave the ball back to the Mustangs at their own 32-yard line. They took advantage, putting together a 17-play drive, gaining 68 yards and eating up 5:58 of game clock. The drive came to an end on a 19-yard touchdown run by Antonio Trone, giving Stanhope Elmore a 28-7 lead early in the fourth quarter.

Chilton County’s next possession was cut short when a pass attempt from Parker Willis was picked off by Donnie Arnold to set the Mustangs up near midfield. Four first downs and twelve plays later, a 12-yard touchdown pass from Bryant to Conner Gregg brought the score to 34-7 with 2:51 remaining.

The Tigers were not quite ready to call it a night, however, as a first and ten play at their own 27-yard line resulting in Miller finding a streaking Byron Davis down the left side for a 73-yard touchdown, bringing the game to its final score of 34-13.

“As far as the first half, we couldn’t have done any better than what we had planned on doing,” CCHS head coach Tal Morrison said. “We came out and executed well and moved the ball to move the chains. We pinned them back when we could and scored when we had the opportunity. The second half we came out and we knew they were going to try to establish the run game a bit more. We just have to learn to play four quarters. There is a lot of fight in this team. The kids work hard, and they are resilient. I am very proud of the way that we played in the first half, but things kind of got away from us during the second half. We had a couple of mishaps here and there, but we are going to come back ready to work next week. There were a lot of positives tonight, but we just have to keep working in order to get better.”

Chilton County quarterback Cannon Miller finished the night with 12 completions on 31 attempts with 235 yards and a pair of touchdowns. Byron Davis and Jakeveon Bolding each hauled in long touchdown receptions, with Davis going for 73 yards and Bolding hauling one in from 52 yards out.

Stanhope Elmore also took to the passing game on the night as Bryant ended the evening with 230 yards on 20 of 34 passing with a pair of touchdowns. Israel Baker was Bryant’s favorite target for the night, ending the game with three receptions and 74 yards.