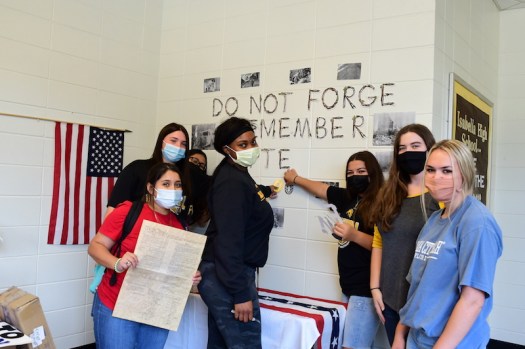 Some members of the Isabella Historical Society change the display from one for Sept. 11 to one celebrating Constitution Day. (JOYANNA LOVE/ ADVERTISER) 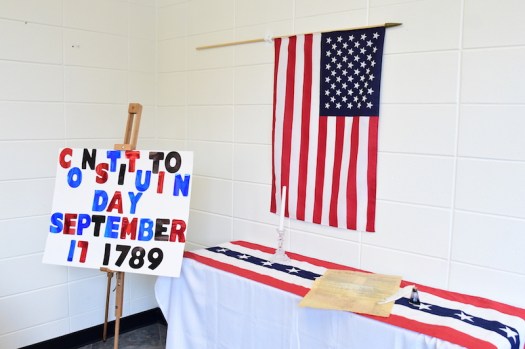 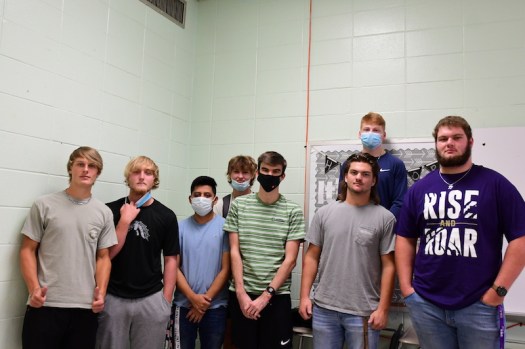 It has been a busy month for the Isabella Historical Society at Isabella High School as they have created three displays highlighting historical events.

The most recent of which commemorated Constitution Day, which marks the anniversary of the signing of the Constitution of the United States on Sept. 17, 1789.

Some of the students are studying this important document through the Constitution 101 program, which focuses on the ideology and philosophy of the document.

Other recent displays were to commemorate the 20th anniversary of the Sept. 11, 2001 terrorist attacks and one honoring the 13 American soldiers who were killed recently in Afghanistan.

“I love history, and everything about it,” Sadie Simon, a senior, said of why she wanted to join.

She has been a member of the group for two years.

“Doing this is something that I enjoy doing, learning about the past,” Simon said.

Her favorite display was a memorial to honor the 13 soldiers.

“We enjoyed honoring them here at Isabella,” Simon said. “We were watching the news a lot, so we kind of already knew about the people … We did research about their names, their families and what they did in Afghanistan.”

Sophia Adams, a senior, often represents the club by singing The National Anthem at the school’s football games.

She said she enjoys participating in the displays.

Destiny Brasher joined the club this year after her history teacher Tom McCall asked her to.

Her favorite project so far has been the memorial to the soldiers because “it was more sentimental.”

“One of the things I wanted to do was make the historical society viable and a rallying point,” McCall, one of the faculty sponsors for the group, said.

McCall said they try to emphasize important dates to educate other students.

He said he hopes those that are a part of the historical society develop an appreciation for the importance of being civic minded that will carry beyond graduation.