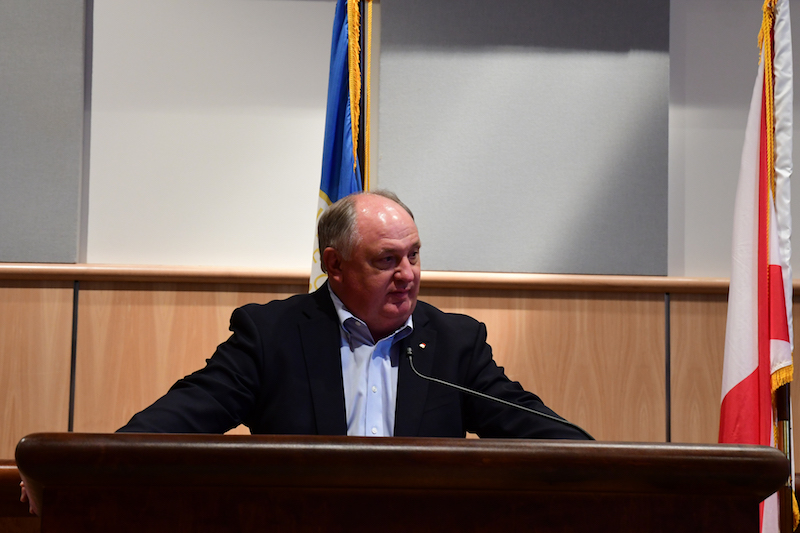 Alabama Farmers Federation/Alfa president and CEO Jimmy Parnell presented his concerns about the progress of the Alabama Farm Center to the Clanton City Council on Sept. 13.

“It has been a very slow-moving vehicle, certainly not at the speed that I like projects to go,” Parnell said.

He commented that he felt it was likely impossible for the project to meet the warranty deed requirement that all buildings be complete by 2023 because of permitting requirements and other issues.

“Most of the challenges we have had are what I call silly issues, egos that get in the way of progress,” Parnell said.

He expressed concern that Mayor Jeff Mims had been quoted as saying he would “put the skids on the project.”

The quote from an Aug. 19 work session was “They (Chilton County Commission) are basically doing everything they can to push us (Clanton City Council) out, and if they do, I will let you know as mayor, I will do everything in my power to put the skids on that place until we find out what we are going to do,” Mims said.

Mims was commenting on a letter that had been received from the Alabama Agriculture and Exhibition Center Cooperative District stating water and sewer was being pursued through other options and a request from the commission for 1% of the city’s sales tax revenue in the proposed retail commercial “triangle” outside the Farm Center.

Parnell said there are likely grants the council could pursue in order to provide water and sewer to the site.

“I would ask that this council would honestly look at whether you would like to do that and get past the fight, I’ll call it, with the county commission and try to provide the sewer to the whole area out there (Alabama Farm Center site and nearby separate proposed retail and commercial area),” Parnell said.

“I ask that you all put the egos aside, and let’s move this project forward,” Parnell said. “If you choose not to do that, just say so, I have other towns that would give their right arm for this project today, and I am going to build this project somewhere. My preference is here in Clanton.”

Parnell asked for the city to have its answers within a month.

Mims said he had told Parnell twice “that we would love to get water and sewer out there.” He asked Parnell for a meeting just the two of them.

“I would like to see this project move forward,” Mims said.

On Sept. 14, Mims said a meeting between himself and Parnell would be taking place withint the next week.

Fundraising for the project has begun, but Parnell said the mayor’s recent comments have negatively impacted efforts. Parnell asked the city to consider contributing financially to the project. The Chilton County Commission has discussed paying for the exhibition hall. The city and the county initially purchased the property together before the Alabama Farm Center was ever announced.

“This is what we would describe as a public-private partnership,” Parnell said. “Those are unique. They are fairly new.”

The Alabama Farmers Federation has never said it would fund the entire complex.

“There is legislation that is passed in Alabama that allows businesses to put dollars into projects for economic development in this state,” Parnell said. “We can capitalize on that, build this project. There are real possibilities for state and federal dollars for these projects to go along with private dollars. Alfa has led the charge, and we are planning to put millions of dollars here. Are we expecting anything in return? No. All we expect is a facility ran in Alabama that can be utilized by all of the citizens of this state that will be something to make us all proud.”

An economic impact study estimated $50 million would be generated directly and indirectly from the project.

Parnell also asked that the Clanton Fire Department provide coverage for the Farm Center. The IDA has already discussed establishing a station that would operate similarly to how the county volunteer fire departments currently operate. Mims said he had been told by the Chilton County Commission chair that the city would not be needed for fire protection and volunteer stations Gap of the Mountain and Collins Chapel would be providing this.

“I just see the need of everybody to work together to make this happen,” Parnell said.

When the Alabama Farmers Federation chose the Alabama Farm Center as its centennial project, it hired an outside company to review 11 possible sites, the consultant recommended Chilton County after an economic impact study.

“That was music to my ears because Chiton County is home for me,” Parnell said. “Since then, we have spent a lot of money, three-quarters of a million dollars, doing the leg work on this project.”