Isabella pulls out win in close game against Thorsby 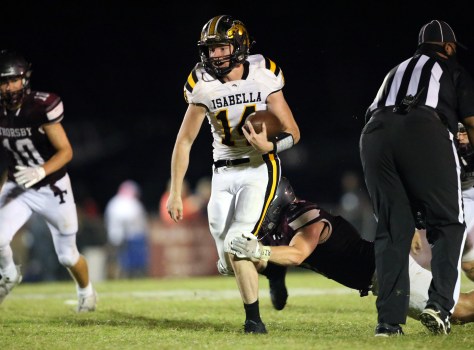 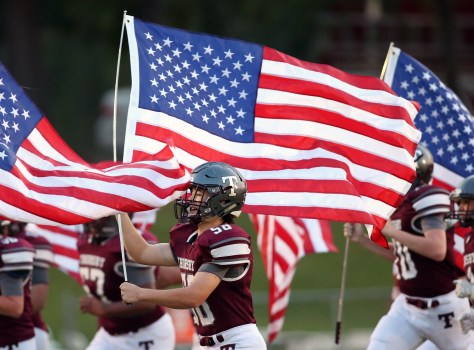 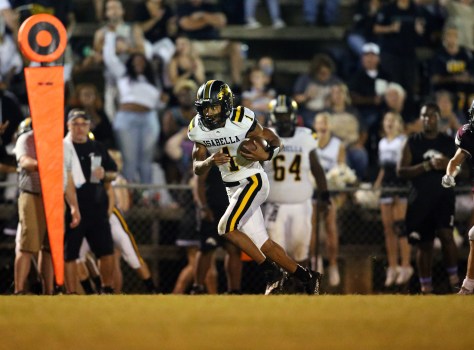 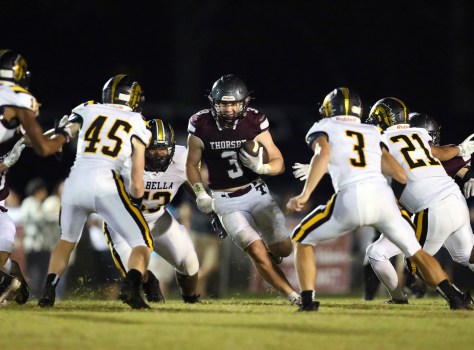 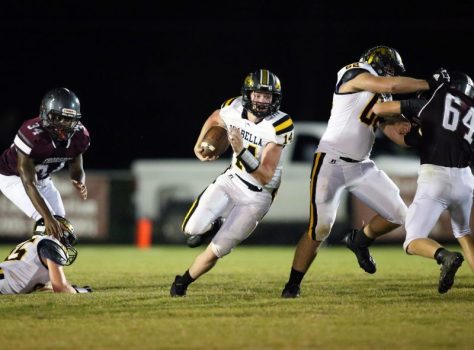 The fans at Susan Bentley Field on Sept. 10 most definitely got their money’s worth as Thorsby High School came up just short to their cross-town rival Isabella High School 28-22.

In a contest that went back and forth all night, little time was wasted as the visiting Mustangs used their opening drive to march 65 yards for the game’s opening touchdown on a 28-yard run by Elijah Kendrick. With the addition of the two-point conversion by Zac Chapman, Isabella was on the board 8-0.

The Isabella lead was short-lived, however, as the Rebels took their next possession 51 yards on 15 plays. Remington Taylor ended the drive with his first touchdown of the night on a two-yard carry. Luke Davis converted the two-point conversion, tying at eight early in the first quarter.

A pair of scoreless possessions by both teams preceded the Mustangs third possession of the night, but this time it was the Rebels defense that came up big. With the Mustangs facing a third and 13 from their own 34-yard line, quarterback Elijah Kendrick dropped back to pass but connected with a player in the wrong colored jersey. Taylor intercepted Kendrick and raced the ball back 46 yards for a touchdown that put Thorsby up 14-8.

Again, the lead was short-lived as the Mustangs answered in just two plays as Chapman busted loose for 56 yards to move Isabella inside the red zone. Two plays later, Chapman scored on a six-yard touchdown carry to give the Mustangs a 16-14 lead.

The first half fireworks were far from over, however. Thorsby faced a a fourth and 10 at the Isabella 43-yard line. On the play, quarterback Luke Davis connected with Taylor for 43 yards and Taylor went into the end zone for his third touchdown of the night, sending the Rebels into the halftime break up 22-16.

Despite all the first half scoring, the third quarter of the contest was rather quiet with no change in the score. The game went deep into the fourth quarter before either team found the end zone again.

Taking over near the midfield, the Mustangs ground game went to work again, as a 15-yard carry by Chapman gave Isabella a first down at the Rebels 36-yard line. The next two plays saw the Mustangs lose yards, but on second and 27, Kendrick connected with Dre’von Lee for a 53-yard touchdown strike that tied the score at 22 apiece with 6:02 remaining.

A quick three and out by Thorsby put the Isabella offense back on the field, starting at their own 32-yard line with 4:24 remaining. A quick first down from Kendrick to Lee moved Isabella out near midfield, but it was Chapman again that put the Mustangs offense on his back. He took the ball 53 yards to give Isabella a first down at the Thorsby three-yard line. One play later, Kendrick scored to give the Mustangs a 28-22 lead.

With 2:27 remaining, the game was far from over. The Rebels started the ensuing drive at their own 45-yard line. A big first down completion from Davis to Taylor moved Thorsby across midfield and had the Rebels on the move. However, that is where the drive stalled as four consecutive incomplete pass attempts by Thorsby turned the ball over to the Mustangs, sealing the 28-22 victory.

The Mustangs workhorse Zac Chapman ended the night with 264 yards on 28 carries with a touchdown. Taylor meanwhile led the Rebels, scoring a rushing touchdown, a receiving touchdown, and a touchdown on defense.