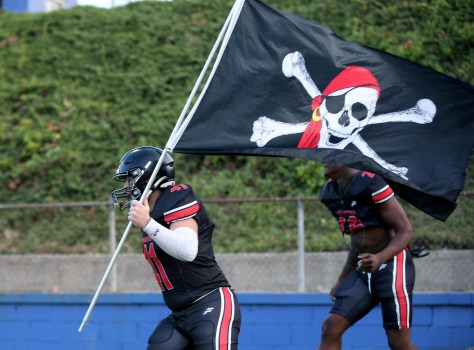 The Pirates take the field in their home opener. (BRANDON SUMRALL/ SPECIAL) 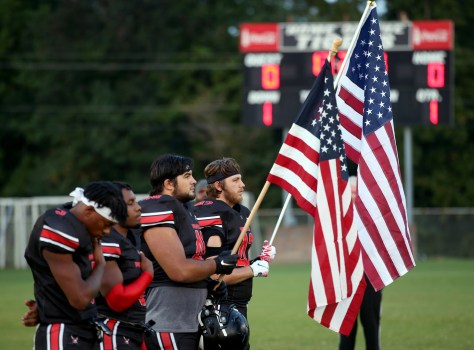 Pirates players stand in a line for the national anthem before kickoff. (BRANDON SUMRALL/ SPECIAL) 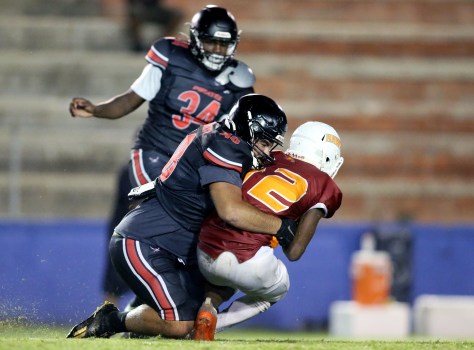 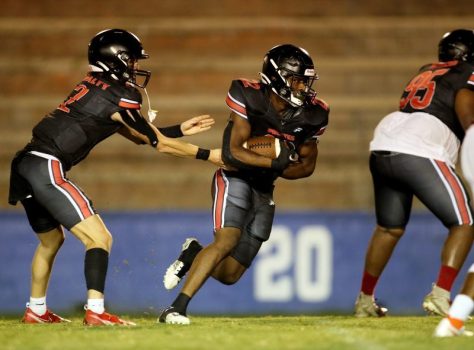 Chilton Prep Academy beat the Jefferson Post Grad Hawks on Sept. 11 for the team’s first win in the history of the program. (BRANDON SUMRALL/ SPECIAL) 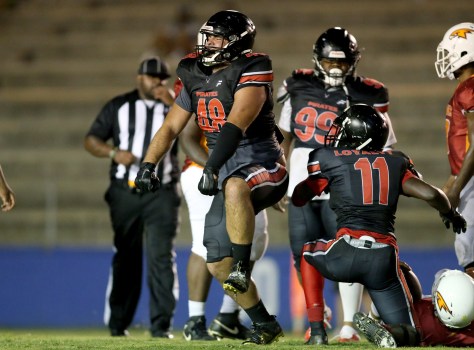 Anthony Fjeldstad spent much of the night in the Hawks’ backfield, collecting multiple sacks in the game. (BRANDON SUMRALL/ SPECIAL)

Chilton County Prep Academy knocked off the Jefferson Post Grad Hawks on Sept. 11 by a score of 24-6. The victory was the first in the history of the program.

The game started off rocky for the Pirates. They managed to get the Hawks offense into a third and 25 situation on their first drive, however, a 38-yard touchdown got Jefferson Post Grad on the board first.

It did not take long for the Pirates to respond. Late in the first quarter, the offense marched 55 yards downfield and capped its second drive with a 35-yard touchdown from Braxton Buck to Dajon Reeves to tie the game at six apiece. That score remained until the second quarter.

From there, it was all Chilton.

The defense did not give up another point all night, although it did add two points on a safety in the fourth quarter.

The offense, led by Buck, did enough to put a pair of touchdowns on the scoreboard, helping the Pirates to an 18-point win.

“We just had to get the guys together and let them know, hey adversity happens,” Pirates head coach Blake Shirah said after the win. “… We found our groove and ran our offense, our defense played great … That’s all we came here to do.”

This game was won in the trenches for the Pirates. Both lines did an excellent job. The offensive line kept Buck well protected most of the night while the defensive line lived in the Hawks’ backfield. Defensive lineman, and Chilton County native, Anthony Fjeldstad had a particularly great night. He picked up multiple sacks in the victory.

“I’m telling you right now he is the best defensive lineman in our conference,” Shirah said of Fjeldstad.

The Pirates will get a chance to rest following this win as they will be off next week. Following that bye, they will host the Birmingham Prep Cardinals, a team they lost to earlier in the season. That game will take place on Sept. 25 at Chilton County High School.