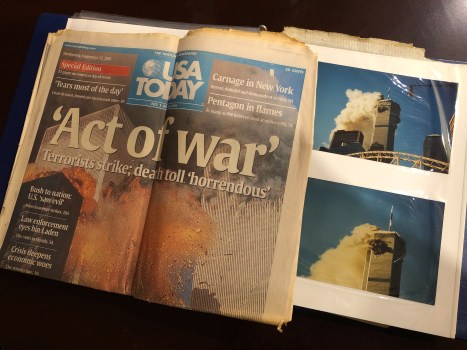 Robert Frater created a scrapbook of newspapers and photos from the Sept. 11, 2001. (DONNA HALL/ CONTRIBUTED) 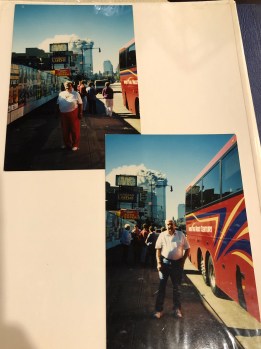 When Chilton County residents Betty and Robert Frater boarded the bus to see the Statue of Liberty on Sept. 11, 2001, they had no idea they would be merely blocks away when a passenger plane crashed into the World Trade Center.

Now, 20 years later, their daughter, Donna Hall, has the stories they shared from their experience.

Their tour guide was delayed, so the bus was driving around New York City waiting until she was ready, Hall said.

They realized that the World Trade Center was on fire, and saw the second plane hit.

The bus pulled over to allow emergency vehicles through, and the Fraters took some photos as they pondered what may have happened.

“They were just a few blocks away when they pulled over,” Hall said

She said her dad “was kind of haunted” by “knowing that probably a lot of the men that were on those (fire)trucks never came back.”

Robert Frater created a scrapbook of photos and newspapers from Sept. 11, 2001.

He died in November 2010, and Betty Frater died last year.

Betty Frater had written down her thoughts from the day.

“I got outside the bus and tried to call our daughter Donna who had our itinerary, and I knew she would be worried, but I couldn’t get out on my cell phone,” she wrote. “A young man who had just walked out the apartment building offered to let me use his telephone, that he said was still working. So, my husband and I went up to his apartment, but when we got upstairs his phone had gone dead, too.”

Hall was on her way to work when the attack took place, and the itinerary was at home.

“For all I knew, they could have been on top of the thing, I had no idea,” Hall said.

She went home and found the itinerary to find out where they would be.

“It was scary to think was the bus OK with the buildings collapsing and debris everywhere,” Hall said. “… Everything that day was so scary because we were blindsided.”

The tour group eventually found a phone that was working. Hall said it was between noon and 1 p.m. when she finally heard from her parents.

It took the Fraters and their bus tour five hours to make it from lower Manhattan to New Jersey because of the slow traffic as everyone tried to get out of the city. The rest of the festivities scheduled for New York were canceled.

“Sleep did not come easily the night of September 11, 2001,” Betty Frater wrote.

Hall said it was “an eerie feeling” that night as she and her husband realized that there were not any planes flying.

“We didn’t know what was coming next,” Hall said. “I think it took a while for everyone to get that sense of calm again.”

He was in the cockpit of a U.S. Airways plane when they started hearing air traffic controllers give general advisories.

“I worked primarily in training, and I was based out of Pittsburgh, Pennsylvania,” Singleton said. “On the morning of Sept. 11, I was back in route to Pennsylvania. I was actually in the cockpit of the plane. I was not a part of the crew, but I was flying back to my base in Pennsylvania.”

During the flight, Singleton said they were “somewhat unaware of the events that were transpiring.”

“When the first airplane hit the Word Trade Tower, and they were unable to communicate with the second one, at some point they realized that these were large airplanes on transcontinental flights with lots of fuel that could do lots of damage,” Singleton said. “We started to hear a lot of the controllers give what they call general advisories to heighten security because of a highjacked aircraft, and we thought, ‘Wow.’”

At that time, they did not know about the attacks in New York or at the Pentagon. A controller later made a comment about a plane flying into the World Trade Tower.

After the second plane hit the tower and controllers lost contact with the plane that eventually hit the Pentagon, all planes were told to land to the closest airport.

“We ended up diverting into Parkersburg, West Virginia,” Singleton said. “The thing that really amazed me was how orderly this occurred. There was very little communication, everyone did exactly what they were supposed to do.”

The decision was made so quickly to land that flight attendants had not been notified and announced that the plane was landing in Pittsburgh. Once they landed, passengers were told the little that the crew knew. Inside the terminal, everyone was watching the coverage.

“The phone systems were just overloaded,” Singleton said. “It took six or seven hours til I could call home and tell my wife where I was.”

Despite the airport only having one rental car and one rental van, “no one was upset, everybody was just in such shock,” Singleton said.

He said a friend from Pittsburg drove to West Virginia to pick Singleton up.

“We had people calling our house, people we didn’t even know in Chilton County, checking to see where I was, and that was touching,” Singleton said. “… I have never forgotten that.”

No flights were completed for several days. Singleton was a part of coordinating how to get planes and crews back to where they needed to be.

Back then in the airline industry, “a lot of people knew each other. We had two of our captains whose wives were flight attendants of the airplanes that got highjacked,” Singleton said.

Singleton said the attacks changed numerous things for the industry, including crews being required to go through security and additional training.

The impact of not being able to fly for several weeks was long lasting and eventually led to U.S. Airways going out of business.