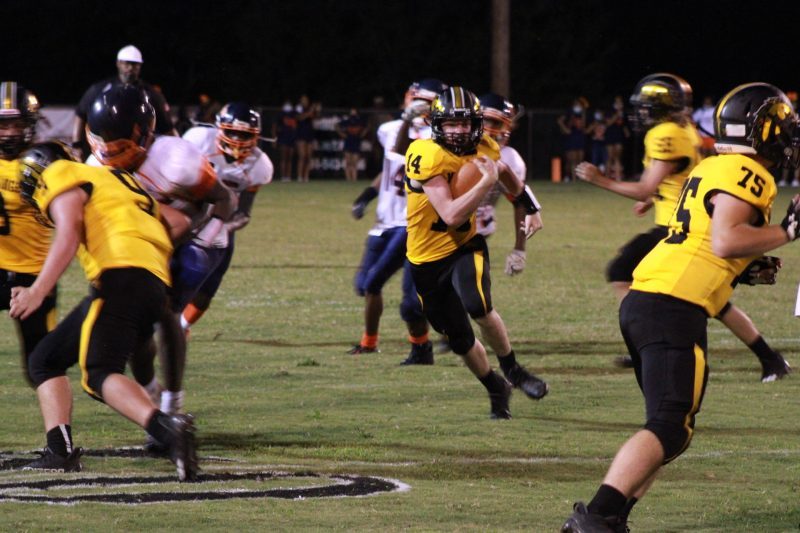 Isabella High School was one of three Chilton County teams to win on Sept. 3, beating Francis Marion by a score of 62-8. (KRISTIN WILSON/ SPECIAL)

Week three was a good one for Chilton County teams. All three county teams that played on Sept. 3 won their games handily.

Maplesville High School put together a great performance on its Homecoming Night, running away with a 69-0 win over Barbour County. Billingsley High School on the other hand was the only local team that lost, falling 40-14 to Loachapoka. Here’s how things went in the other two local games.

Isabella High School was finally able to add a tally to the win column in its third game, crushing Francis Marion. The win came after two tough losses to Fyffe High School and Maplesville High School to open the season.

The Mustangs came out with the intent to put those losses in the past, and opening up regional play with a lopsided win was just what the doctor ordered for this squad.

Quarterback Eli Kendrick led what was an incredible offensive performance. He completed 10 of 16 passes for 191 yards and threw three touchdowns in the game. He also ran for 40 yards, scoring once more on the ground.

Leading the rushing attack was Zac Chapman. He picked up 100 yards off eight rushes, averaging a whopping 12.5 yards per rush. He scored twice on the ground. Chapman picked up another 60 yards off two receptions while adding one receiving touchdown.

Isabella will look to keep things rolling in week four as they head to Thorsby for a big rivalry game against the Rebels.

Verbena High School earned a big win over A.L. Johnson High School to improve its record to 2-1. The Red Devils were able to bounce back from an ugly week two loss against Thorsby, getting to 2-1 for the first time since 2016.

DJ Jackson once again led the way for Verbena. The running back picked up 192 yards off nine rushes, averaging over 20 yards per rush. He also scored two of Verbena’s four touchdowns.

Scoring the other two touchdowns was Verbena quarterback Jarod Quinn. Quinn also had an outstanding game rushing the ball, picking up 156 yards off 11 rushes.

Verbena will hope to keep its winning ways going in week four as they host Autaugaville High School in a big regional matchup.