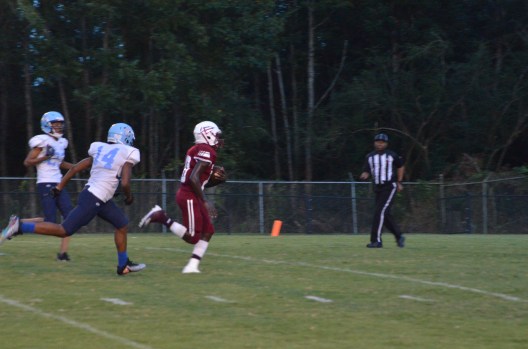 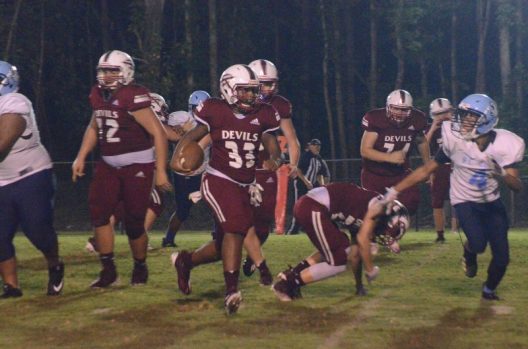 For Maplesville High School players, coaches and fans, this game was a sight to behold.

Maplesville beat Barbour County on Sept. 3 by a score of 69-0. It was a great win for the Red Devils, as they put on an outstanding performance for the home crowd on Homecoming night in the team’s first regional game.

While this game was a blowout in Maplesville’s favor, the score does not do justice to how lopsided it was.

The Red Devils came out swinging, with Jakavion Jackson scoring a 43-yard touchdown on just the second play of the game. It was the first of eight first quarter touchdowns for Maplesville.

Other players got in on the action like Payton Cook, Rashun McCary and even Britten Worrall on the defensive side as he recovered a fumble midway through the quarter and took it back for a touchdown.

By time the first quarter was over, the Red Devils led 55-0.

“Everything went right tonight,” Maplesville head coach Brad Abbott said. “Our kids came in focused. They know … they were 2-0 but hadn’t really won anything because those non-region games only come into play on tiebreakers. This was one we had circled, we had to get this under our belt.”

After the first quarter had ended, the teams and officials decided to cut the clock in half for the rest of the game, making each quarter only six minutes long instead of 12.

The Red Devils took their foot off the gas from there but still severely outplayed the Jaguars.

Barbour County only managed one first down the whole game and only crossed the 50-yard line once. That one time they got into Maplesville territory was on a kick return.

The Jaguars also did not protect the ball. They lost six fumbles to Maplesville, while the Red Devils did not turn the ball over once.

“We did what we had to do,” Abbott said. “No penalties, no turnovers. We played clean, disciplined football. That is something to build on.”

Maplesville will have to turn the page quickly, because next week they will play host to Billingsley High School in a big rivalry game. It will be another regional matchup, with kickoff set for 7 p.m.