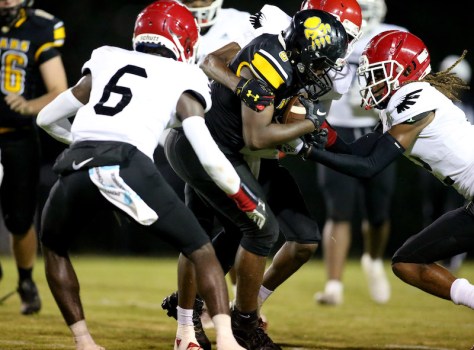 Billingsley running back Randriquis McCary is swallowed up by the Loachapoka defense. (BRANDON SUMRALL/ SPECIAL) 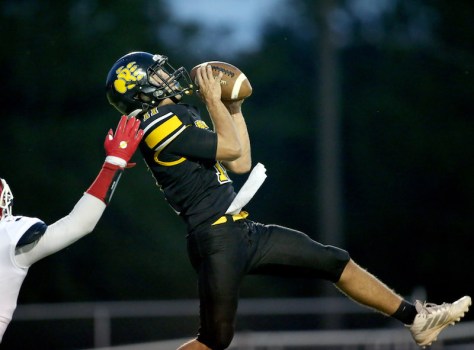 The turnover bug bit Billingsley early and often, as a promising opening drive that started at the 40-yard line and encompassed half of the opening quarter ended in a fumble by Billingsley quarterback Levi Arington. The fumble gave the Indians the ball at their own 15-yard line. Loachapoka was not immune to the turnover bug themselves though as Arington redeemed himself with an interception near midfield to hand the ball back to his offense.

Billingsley’s second turnover of the night came shortly after, however, as Arington lost a handle on the ball in Loachapoka territory. This turnover, however, cost the Bears as one play later Nickalaus Farrow broke loose for a 46-yard touchdown run to give the Indians a 6-0 lead early in the second quarter.

Two plays later, the Bears third fumbled once again, setting the Indians up at their own 30-yard line. Six plays later, Farrow scored his second touchdown of the night on an 11-yard carry to extend Loachapoka’s lead to 12-0.

The ensuing possession for the Bears resulted in them putting together their first scoring drive of the night. The offense went 60 yards down the field and capped the drive off with a three-yard touchdown carry by Arington, cutting the deficit to six points at halftime.

Loachapoka received the second half kickoff and wasted little time putting more points on the board. A 25-yard touchdown run by Farrow put the Indians up 20-6.

Billingsley’s fourth turnover came on the Bears’ first drive of the second half as an interception by Andre Lee set the Indians up near midfield. However, once again Arington brought a halt to the Loachapoka drive, thanks to an interception that set Billingsley up with first and 10 at the Indians 23-yard line. A quick four and out did not help the Billingsley cause, however, as Loachapoka got the ball right back at their own 18-yard line.

The Bears defense stood tall on the ensuing Loachapoka drive, setting their offense up near midfield. Seven plays later, Arington punched the ball in from three yards out to make it a 26-14 game early in the fourth quarter.

The 12-point Billingsley deficit was soon increased, as Farrow received a kickoff at his own 28-yard line and ran right through the Bears’ kickoff team for a 72-yard touchdown. Things would only get worse for Billingsley as they fumbled the ensuing kickoff, setting the Indians up near midfield. Soon after, Farrow took the Indians 56 yards down the field for his fourth score of the night.

With 2:59 remaining, the seventh and final turnover of the night came on a pass attempt by Lee that fell into the hands of Montavis Montgomery. He returned the interception 91 yards for a touchdown, bringing the game to its final score of 40-14 in favor of the Indians.

Farrow ended the night with 235 yards on 13 carries with four touchdowns for Loachapoka. Arington led the Bears with 100 yards and two touchdowns on 17 carries, while adding another 43 yards on five completions in 11 pass attempts.