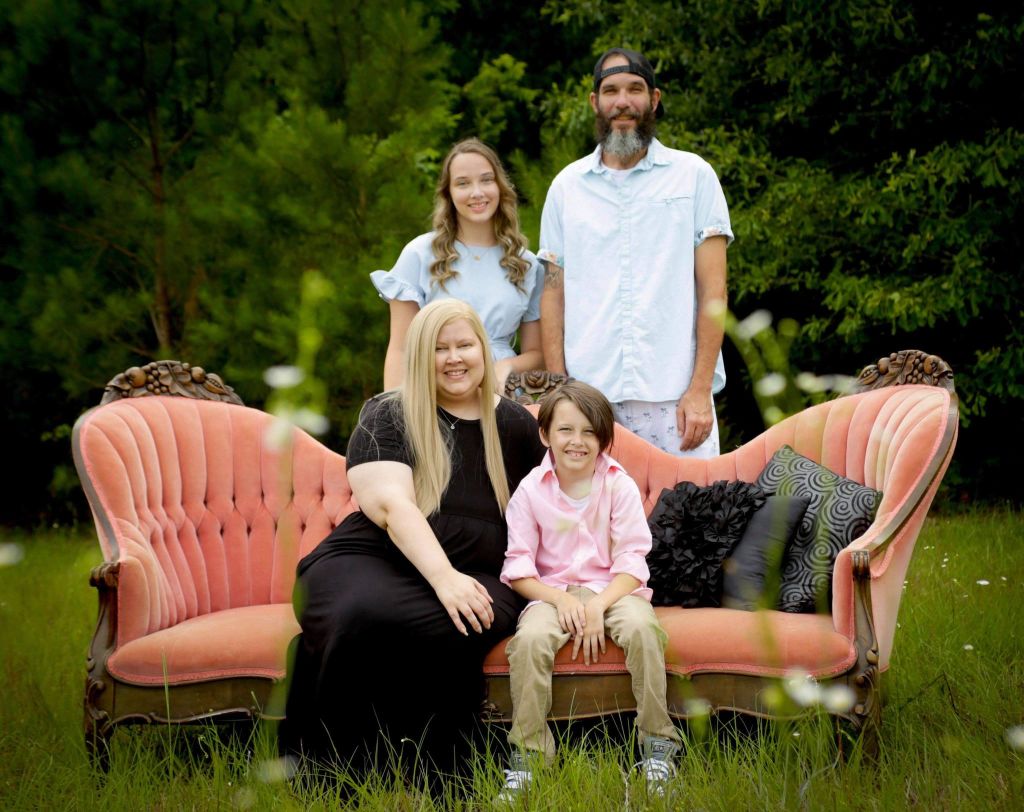 Melissa Kilburn with her family.

I first learned of Melissa Kilburn’s health journey from her daughter who attended a summer Bible study I led a couple of years ago. At the end of Bible study each week, we would share prayer requests. While requests changed from week to week, Katelyn was faithful to ask for prayer for her mom. She shared that her mom was battling cancer and asked us to pray for her healing. Although there was fear and concern on Katelyn’s face, there was also great faith that resided in her heart.

“In August of 2018, I was having some pain in my breast and felt a little lump. At the time, because I was only 33, I just thought it was a cyst,” Melissa said. “For months, I ignored it. It started growing and got more painful because it was putting more pressure on the nerves,”

Melissa decided to go to the emergency room when the lymph nodes under her chin became swollen and painful.

“They immediately did an ultrasound on my breast. It looked suspicious, so they referred me to St Vincent’s to get a biopsy. A few days later in the middle of Dollar Tree, I got the phone call that it was cancer,” she shared as her voice quivered.

Melissa began meeting with a team of doctors and learned from the oncologist that she had a form of cancer known as triple negative.

“Mine was Stage 3 because it had spread outside of my breast. My doctor went over my treatment plan, and I started chemotherapy,” she shared.

Doctors started her on a treatment plan that included 16 rounds of chemotherapy which left her sick, nauseated and fatigued. Though she faced a serious illness, she was determined to embrace the heart and mind of a warrior.

“When I found out, I had my moment of crying, but then I switched to warrior mode,” Melissa declared. “It can sometimes be hard to believe that God is there in the hard moments, but I know He is here. He is here in the sadness, the madness, and the good. He’s the same in the valley as He is on the mountain top, and I held on to that. I knew He was going to get me where I needed to be. He doesn’t change who He is, and He is always here for us,” she professed.

Melissa finished chemotherapy treatment in February 2019 and had a PET scan that revealed everything looked great. However, because her cancer was an aggressive type, it was recommended that she have a double mastectomy along with radiation.

“I had my surgery in May of 2019. I had a month of healing and then started radiation,” she said. “I had 28 radiation treatments Monday-Friday for five or six weeks. I experienced some burning, but it was mostly fatigue. Once I finished radiation, I had a three-month break and went in for a check-up. They decided to do a chemo pill for maintenance for a few months, and it was supposed to be the last of the treatment.”

Although Melissa faced a few hurdles during her treatment, including two infections from the expanders that were placed under her skin, she finished in April 2020 and was doing great. Her blood work looked good, so it was a surprise when she had a seizure later that month. She was taken by ambulance to the hospital where she had another seizure. A CT scan revealed suspicious areas on her brain. She also had an MRI and other various tests on her chest, abdomen and a bone scan. Melissa stayed in the hospital for three days before being sent home with medication for her seizures.

“The doctor went over all of my scans and found three lesions on my brain, two in my lungs, and one on my liver,” she stated. “A lot of women don’t know that breast cancer can come back, and the more aggressive types don’t necessarily come back in the breast. It usually spreads to other organs. That takes you to Stage 4 where it’s no longer curable. Once it spreads out, all they can do is manage your time.”

While this family has anchored their hope in Christ, this journey has not been easy, especially for their children.

“My son, Lj, knows I’m sick, but he doesn’t know the extent of it. He probably knows more than he lets on, but he seems to handle it a little better,” shared Melissa. “I haven’t gone into how bad it really is just yet with him. Katelyn is older and understands a lot. She has hard times sometimes, but I try to keep positive and remind her that God hasn’t left us because I don’t want them to turn against Him. She struggles with the reality of what the future is, but she is 14. I feel for her because not only is she going through those first teenage years, but it’s more difficult having your mom sick.”

Over the last several months, Melissa has been given various chemotherapy options. Currently, she is on her fourth treatment, which is a pill she takes at home. She has also undergone whole brain radiation because of the 18-20 new spots that developed in her brain. She has faced many challenges, but she is thankful for all those who have supported her family during this time.

“I have an amazing church family at New Life who set up a meal train when I was going through my treatments. They always check on us and help us if I have really bad days with fatigue. They have been behind us and support us in anything that I need,” she said. “My mother-in-law lives in Florida, but she lived with us that first year to help get the kids to school and help with my appointments. My husband, Christopher, has also been an amazing rock to me. Watching him grow closer to God and in his faith during this time has been amazing to watch.”

Despite Melissa’s circumstances, she holds firm to her faith in God. “It’s not a great situation with cancer, but it doesn’t mean I’m giving up on God,” she proclaimed. “Sometimes it’s hard to believe He’s here in the bad times, but He is always here. He’s your light. I’m putting on His armor, and He’s going to help me get through whatever it is I have to face.”

“Put on the full armor of God, so that you can take your stand against the devil’s schemes.” Ephesians 6:11