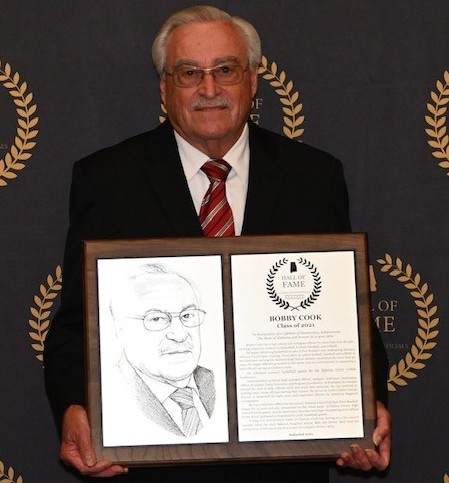 Bobby Cook was inducted into the Alabama Sports Officials Hall of Fame on Aug. 14. Cook served as a high school and collegiate official for over 40 years in the state of Alabama. (MELINDA MCCULLOUGH/ CONTRIBUTED)

On Aug. 14, Bobby Cook was one of 14 outstanding officials inducted into the Alabama Sports Officials Foundation (ASOF) Hall of Fame. Being selected as a member of the ASOF Hall of Fame is a most distinguished honor for contest officials in the state of Alabama, recognizing each inductee’s sacrifice, dedication and other major contributions that have had a prominent impact on athletics in our great state. According to Greg Brewer, retired AHSAA director of officials and current spokesperson for the ASOF, all selections were made from a special ASOF Hall of Fame committee, who selected individuals to be recognized as uncompromised leaders and mentors at every level.

Cook was a high school and collegiate official for more than four decades, working numerous contests in basketball, football, baseball and softball. He began officiating basketball in 1962 at Fort Rucker while undergoing Alabama National Guard basic training. Cook said he started officiating as an excuse to get off base to see his bride, Betty, and ended up finding a hobby that he loved. From there, he developed a real passion for officiating, and added football, baseball and softball to his repertoire, serving the Alabama High School Athletic Association for more than 40 years. He also officiated girls basketball at the collegiate level.

Cook established associations for baseball, softball and football in Chilton County, and ran those organizations for 30 years. He held numerous administrative positions both locally and, on the state-level including assignor, instructor, association officer, evaluator, camp instructor and program coordinator. As evaluator, he traveled around the state to help officials excel and reach their potential. He was involved in training many young officials starting their careers. He served as North Central District director in basketball for 8 years and supervised officials for numerous regional and state tournaments.

He was a volunteer official for the annual Alabama Lions Club East-West Baseball Games for 15 years, and also volunteered on the “chain gang” at Chilton County High School football games. He spent many Saturday mornings volunteering as an official for the Royal Ambassador Organization youth basketball games.

When asked what he would tell a young official just starting out, Cook said “Don’t do it for the money.  Do it for the love of the game, for the love of the players. I was fortunate enough to get to know hundreds of athletes in Chilton County. I am always running into someone who says I called their games when they were in school. I always tried my best to be fair and to be a positive influence both on and off the field.”