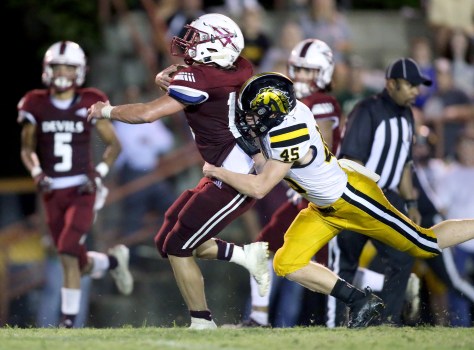 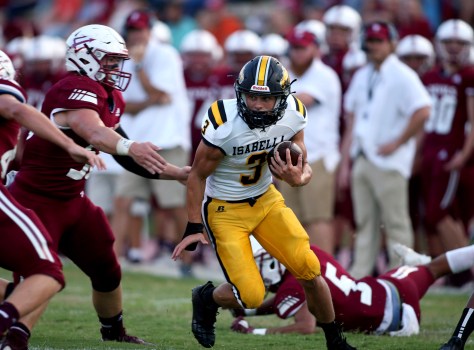 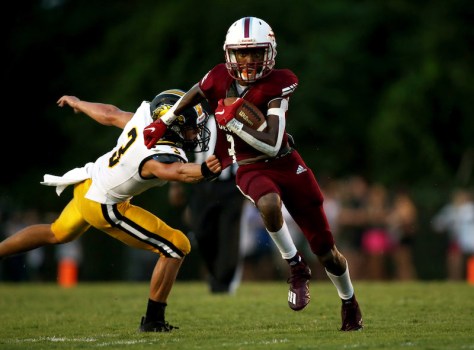 The annual rivalry between Isabella and Maplesville on Aug. 27 held up to its reputation, as last year’s overtime thriller looked like it could have a sequel. However, it would not to be, as Maplesville’s Jonathon Wilson busted through the Mustang defense on fourth and goal with 0:55 to play to score a Maplesville touchdown. The score propelled the Red Devils to a 28-21 victory over its crosstown rival.

Isabella looked poised to strike first with its opening drive, but the game’s first turnover on first and goal gave the ball to Maplesville. Starting their first possession at their own eight-yard line, the Red Devils marched 92 yards down the field and capped the drive with a 16-yard touchdown run by Wilson to take an early 7-0 lead.

The Red Devil lead was short-lived, however, as a 51-yard connection from Isabella quarterback Elijah Kendrick to Phillip Williams set the Mustangs up first and goal at the Maplesville 10-yard line. One play later, Zac Chapman tied the score for the Mustangs.

The Maplesville offense was unfazed as its second scoring drive of the night started at the 39-yard line. The Red Devils again went down the field and punched in a two-yard touchdown on a carry by Troy McMillan to give Maplesville a 14-7 lead with 8:55 remaining in the second quarter.

Isabella used its ensuing drive to prove that they fine going blow for blow, as a 59-yard touchdown run by Braxden Giles cut Maplesville’s lead to one point.

The first half was far from over as Maplesville started its next possession at its own 46-yard line with 7:59 left to play in the second quarter. With 1:02 to play in the half, Maplesville extended its lead to 21-13 thanks to a five-yard touchdown run by Brady Harrison.

Isabella opened the second half with a bit of trickery. The Mustangs ran an onside kick and the ball fell into the hands of an Isabella defender, setting the Mustangs up near midfield. 13 plays later, an eight-yard touchdown by Zac Chapman, along with a two-point conversion by Giles, tied the game at 21 with 9:27 remaining in the third quarter.

Both teams had their opportunities to pick up the win during the closing minutes, as a fourth and one goal line stand by the Red Devils and a pair of forced punts by Isabella kept the game tied deep into the fourth quarter.

Facing a fourth and nine at the Maplesville 26-yard line, Isabella was unable to convert thanks to a big sack by the Red Devils defense. Maplesville’s offense took over at its own 42-yard line with 3:54 left in the game.

A play on third and seven near at the Maplesville 45-yard line saw Jakavion Jackson break loose for 54 yards to move the Red Devils down to the Mustangs one-yard line. Maplesville was unable to punch the ball in on first, second and third down. However, on fourth and goal, Wilson crossed the goal line, sending the Red Devils into a frenzy as they celebrated a return to the winning side of this rivalry.

“The last two years has been two great ball games,” said Maplesville head coach Brad Abbott. “It is just a rivalry game. There is no region or anything involved this year. I am just glad that both teams showed up tonight and gave everyone a great game, but we are happy to be on top this time.”

Chapman led the way for Isabella with 141 yards on the ground behind 21 carries. He also scored a pair of touchdowns.