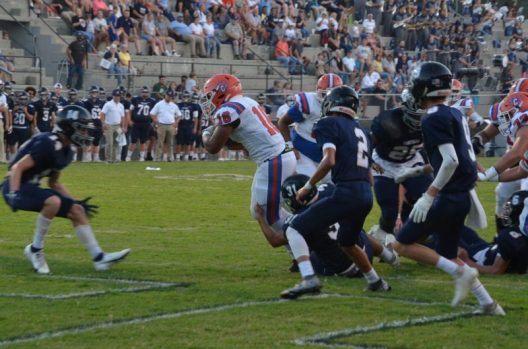 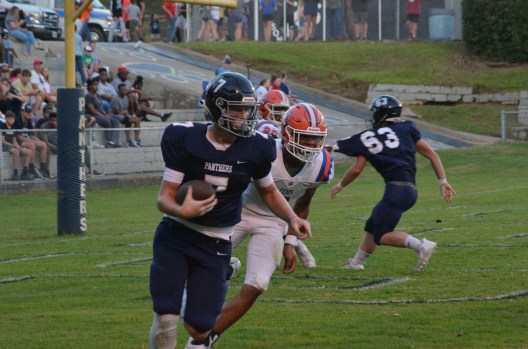 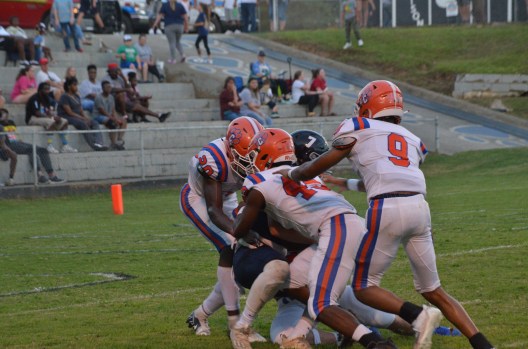 Jemison quarterback Hayden Robinson is swallowed up by CCHS defenders. The Panthers were held to seven points on offense in the game. (ZACHARY SEIFTER/ ADVERTISER)

Chilton County High School earned a dominant win over Jemison High School on Aug. 26. The Tigers defeated the Panthers by a score of 40-7.

While the score was lopsided, this game had a little bit of everything.

There were big plays, there were turnovers, there were shoving matches, and Jemison head coach John Therrell even had a moment that fired up the JHS crowd when he screamed at the officiating crew.

From the start, this game was entertaining.

CCHS jumped out to an early 14-0 lead in the first quarter. However, the Panthers kept them at bay for much of the second, and even brought the deficit down to seven points following an 80-yard touchdown pass from Hayden Robinson to Tyriq Archie.

However, multiple mistakes at the end of the first half ended up being Jemison’s undoing.

On the defensive side, there were two instances in which the Panthers could have had an interception, but their defensive backs dropped the football. On special teams, JHS fumbled the ball at its own 20-yard line on a kickoff.

These mistakes allowed CCHS to score two touchdowns late in the second quarter, giving the Tigers a 27-7 lead at halftime.

While Jemison made its fair share of mistakes, the Tigers played a sloppy game as well.

CCHS had multiple drops on the offensive side of the football. They also fumbled, giving Jemison the ball early in the second half.

However, they did enough things right to win the game.

“I think for the most part we did a pretty good job tonight,” CCHS head coach Tal Morrison said. “We still looked real sloppy at times. Dropped passes in our hands, just missed opportunities on both sides of the ball … Kids played hard, which is great, but we’ve got to clean up a lot of these things going into this region play in two weeks.”

Fortunately for both teams, they both will have their bye weeks next week, which should give them a chance to watch tape and clean up the mistakes they made.

Jemison will stay at home on Sept. 10 for its first game against a regional opponent when Marbury High School comes to town.

CCHS, on the other hand, will hit the road again, traveling to Calera High School on Sept. 10 for its first game against a regional opponent.