Arrest made after trespasser shot 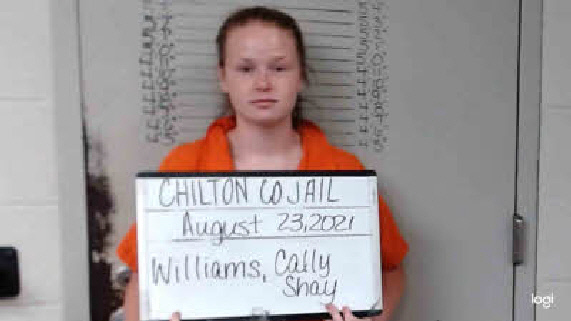 Jessica Forsythe was transported by medical helicopter to UAB Hospital around 12:34 p.m.

“She was shot in the abdomen by another person that had left the scene,” Chilton County Sheriff John Shearon said.

The shooter was later identified as Cally Williams. Williams was arrested on charges of assault first degree. She was released on a surety bond at 6:18 p.m. on Aug. 23.

Shearon said Williams was located within half an hour of the incident.

Both the victim and shooter live in a nearby mobile home park.

According to the Sheriff’s Office, there had been multiple calls previously about Forsythe trespassing in the area.

Shearon said that on Aug. 23, Forsythe was in Williams’ front yard, when Williams told Forsythe to leave or she would shoot her. Forsythe remained in the yard, and Williams proceeded to shoot.

As of Aug. 24, Forsythe was “in critical but stable condition,” according to Shearon.

Assistant Chief Shane Mayfield said witnesses stated that Forsythe was unarmed and was not trying to enter the home or harm Williams.

“We can’t justify a stand your ground situation,” Mayfield said  because there did not seem to be evidence for an immediate potentially deadly threat from the victim.

The Stand Your Ground Law is likely to be an aspect of this case in court.

C.J. Robinson, chief deputy district attorney for the 19th Judicial Circuit, said the Stand Your Ground Law is usually considered in these cases.

He could not comment on the specific case, but said Alabama law only allows for the use of deadly force if a person believes someone is going to seriously harm or kill them.