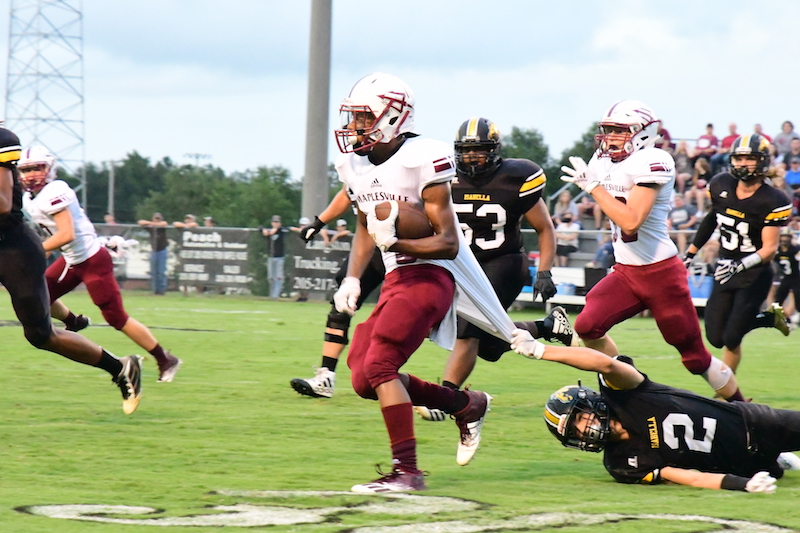 Isabella visits Maplesville on Aug. 27 for a rivalry game that has been extremely competitive in the recent past. Isabella has won the last two matches, winning in 2020 by one point in overtime. (FILE)

Week two is rivalry week in Chilton County it would appear. Across the schedule, there are multiple in-county games, including rivalry games such as Isabella-Maplesville and CCHS-Jemison.

All have intriguing storylines following a slate of week one games that saw just three local teams win.

However, no rivalry has been quite as entertaining in the recent past as the one between the two teams from Maplesville.

Winning streaks have been the norm for these two Chilton County football giants when it comes to this rivalry. The two have played each other in each of the last five years. Isabella has won the last two matchups after having lost three straight times from 2016-2018.

Last season’s game was an extremely close battle. Isabella squeezed out a 21-20 victory in overtime on a Braxden Giles touchdown reception from Jake Logan.

The two teams come into this season’s game after seeing very different results in week one. Maplesville took out Highland Home 14-13 in what was a very close defensive battle. Isabella on the other hand fell to Fyffe 30-6, although Fyffe has the longest win streak in the state currently and has won three straight state championships.

Both teams came into the game last season with the exact same week one result. Maplesville beat Highland Home to kick off 2020 while Isabella fell to Fyffe.

So, this is not uncharted territory for either team, and should it be anything like what was seen last year, this rivalry game will go right down to the wire.

Week two will begin the exact same way as week one, with a Thursday night showdown in Jemison between two rivals.

This week, Chilton County High School is the one visiting the Panthers in a showdown between the two largest schools in the county.

CCHS won this matchup in 2020, defeating the Panthers by a score of 34-16. The Tigers have beaten the Panthers three straight times.

Both squads are coming off a disappointing week one. CCHS fell at the hands of Central of Clay County 34-7 while Jemison lost to Thorsby 32-0.

One of these teams will get the bad taste of week one out of their mouth, while the other will fall into an early 0-2 hole.

Both of these teams are flying high after big week one wins to start the 2021 season.

Thorsby kicked off its season with a road win over rival Jemison High School. The Rebels dominated the game, winning by a score of 32-0. Their run game was borderline unstoppable with AJ Smith and Luke Davis combining for four rushing touchdowns.

Verbena on the other hand was equally as dominant. They took out Central Coosa by a score of 36-8. Running back DJ Jackson was excellent, rushing for over 150 yards while scoring two rushing touchdowns. The sophomore also scored on a punt return.

This week, each team will be tasked with stopping the other’s run game. It will be a tough task, as each team has excellent starting running backs.

It will be an important game as Thorsby head coach Daryl Davis will look to get his team off to a hot 2-0 start, while Verbena head coach Allen Brothers will look to start off his tenure with another big win.

Billingsley High School will host Vincent High School in its home opener after shutting out Prattville Christian Academy in its first game. The Bears defense was dominant, not allowing a point on its way to a 1-0 start.

These two teams were scheduled to play a season ago, but the game was forfeited by Vincent, giving Billingsley the win.

This year, neither team will have to worry about a forfeit.

Vincent is coming off a disappointing week one loss to Winterboro High School. The Yellow Jackets fell by a score of 18-16, but will look to bounce back in week two against the Bears.

Billingsley will do their best to not let that happen. Instead, they will look for a 2-0 start to their season for a second straight year.