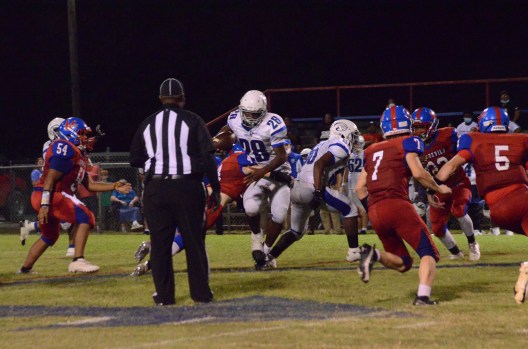 Verbena’s defense excelled in the team’s win over Central Coosa. The unit allowed just one score the entire night in the 28-point win. (ZACHARY SEIFTER/ ADVERTISER) 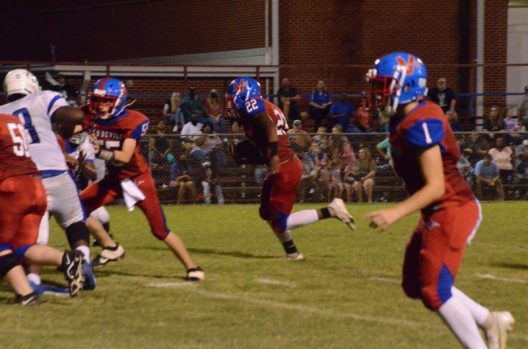 D.J. Jackson had an outstanding game for the Red Devils in their win over Central Coosa. Jackson accounted for three total TDs in the game, as well as over 150 rushing yards. (ZACHARY SEIFTER/ ADVERTISER)

Verbena High School started off its 2021 season with a strong performance over Central of Coosa County High School on Aug. 20.

The Red Devils won their season opener over Central Coosa by a score of 36-8. Running back D.J. Jackson was the star of the game for Verbena, scoring three total times in the victory.

Two of those touchdowns came on offense for the running back. He also put up 162 yards rushing for the night. His third touchdown came on a punt return in the second half.

“He did a great job of finding holes and accelerating to the second level,” Verbena head coach Allen Brothers said. “I think that’s his niche that a lot of people don’t really know about is that when he sees a hole he attacks it hard. He doesn’t try to bounce it outside, he hits it and then he makes his move on the linebackers or safeties.”

While Jackson took care of things on the offensive side of the ball, Verbena’s defense took care of business as well. A Triston Wilhite interception off Cougars QB Elisha Hayes to start the game gave the unit momentum that it carried throughout the game.

The defense gave up just one score, a 55-yard touchdown run by Cassidy Howard. They forced two turnovers in the game and were relentlessly attacking Central Coosa ball carriers all night.

“We’re going to go as far as our defense takes us,” Brothers said. “Our offense is looking good but there’s going to be games where we play really tough defensive teams, so our defense is going to keep us in the game … We really preach 11 guys to the football, and they do a really good job of getting after it.”

Brothers picked up the win in his first ever game as head coach of the Red Devils. He will attempt to keep things rolling as his squad travels to Thorsby High School to take on the Rebels on Aug. 27. Kickoff for that game is at 7 p.m.

As for Central Coosa, they will hit the road again to face off against LaFayette High School on Aug. 27. Kickoff for that game is at 7 p.m.