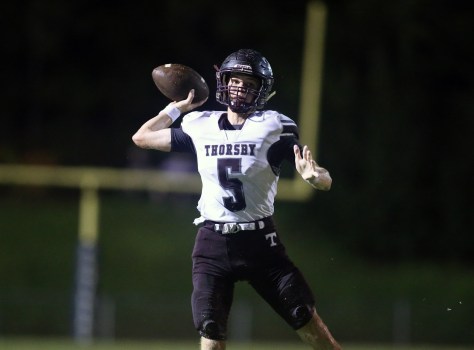 Quarterback Luke Davis led the Thorsby offense to a 32-point night against Jemison. Davis scored twice, once in the air and another on the ground in leading the Rebels to victory. (BRANDON SUMRALL/ SPECIAL) 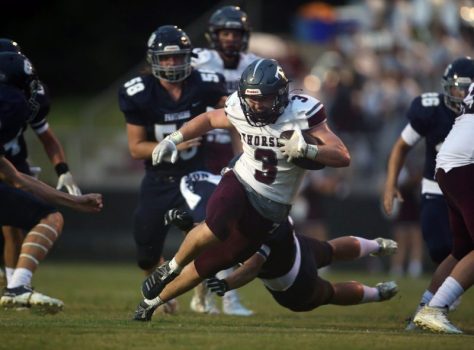 Thorsby running back AJ Smith was unstoppable against Jemison. The senior running back scored three times on the ground in the 32-0 win for the Rebels. (BRANDON SUMRALL/ SPECIAL)

From the beginning, the Rebels looked ready to dominate.

They forced a punt on Jemison’s opening possession, and went right down the field for a touchdown on their opening drive.

It never got better for the Panthers, as Thorsby High School ran away with a 32-0 opening night win on Aug. 19.

Everything was going right for Thorsby. The defense had an answer for everything that Jemison’s offense threw at them. They forced four turnovers, all fumbles. Jemison did not have a play in Thorsby territory until late in the third quarter.

“Our defense played great,” THS head coach Daryl Davis said. “Which allowed our offense to do some of the stuff it did. I can’t be more proud of our guys, how hard they played.”

On the offensive side of the ball, the Rebels could not stop scoring.

Running back AJ Smith and quarterback Luke Davis stole the show. Smith ran for nearly 100 yards and scored three times. Davis had a rushing touchdown of his own, and threw another to sophomore wide receiver Nate Thomas.

“Me and AJ, we’ve been together since little league,” Davis said after the game. “Ever since then, we’ve always had a connection at quarterback and running back … It came to use on the field tonight.”

On Jemison’s sideline, this game was a tough way to begin the John Therrell era. Therrell’s defense struggled to get off the field on third down, while his offense had trouble protecting the football.

Jemison was without its starting quarterback, Hayden Robinson, but according to Therrell, there were other mistakes Thursday night that need to be corrected for them to have a successful season.

“We have some things that we need to correct and we’ll get them corrected,” Therrell said. “I was proud of our guys and how they played. They played an entire four quarters, and they played hard the entire time … Hopefully, they come out with a fire and a passion this next week at practice, and we put them in a situation where they can be a little bit more successful.”

Next week, the Panthers will play a second straight rivalry game as they host Chilton County High School. It will be another Thursday night game on Aug. 26, with kickoff scheduled for 7 p.m.

The Rebels will return home in week two to take on Verbena High School. That game will be held on Aug. 27 with kickoff scheduled for 7 p.m.