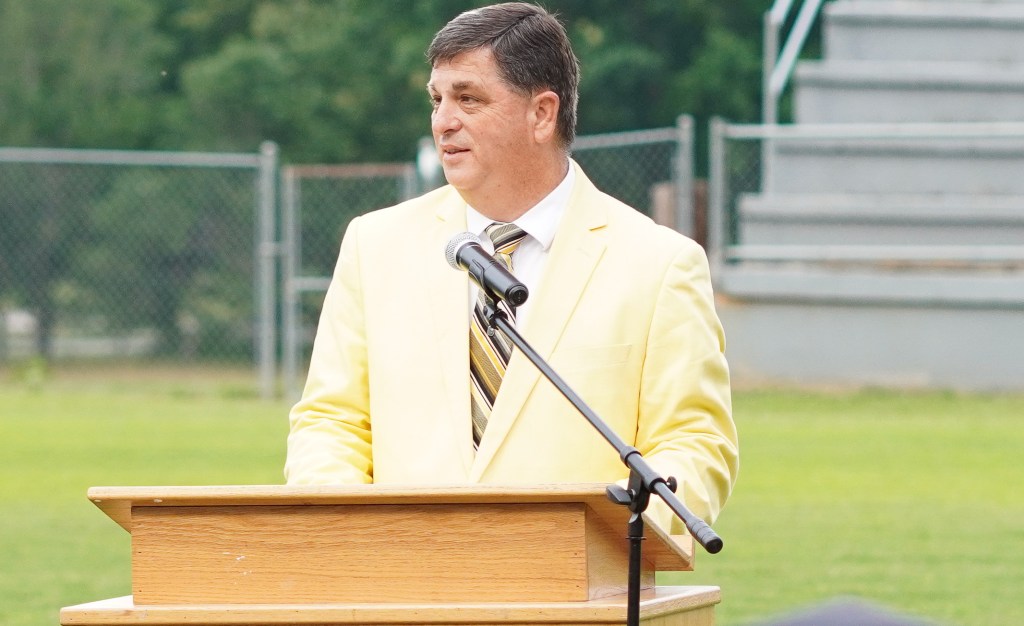 Ricky Porter has enjoyed being a lifelong resident of Chilton County. (CONTRIBUTED)

Editor’s Note: This story originally appeared in Faces and Places 2021. Copies are still available at our office, 1109 Seventh Street North in Clanton.

Sometimes when one grows up in a small town, they look for a way to leave as soon as they graduate high school.

But for Isabella High School Principal Ricky Porter, Chilton County has always been a home he has loved.

“I’ve never lived anywhere else,” Porter said. “… I have always been happy living in Chilton County, and I don’t really have a desire to go anywhere else.”

Porter grew up in the Providence community. He attended Jemison schools and graduated from Jemison High School.

“It was a great experience. I had great teachers,” Porter said.

He went on to complete his bachelor’s degree in education at the University of Montevallo.

“Then, I came back and started teaching in Chilton County,” Porter said. “So, basically all my life I’ve just went to school.”

His extended family is here, and he is involved in his church, The Church at Robinson Springs.

“I enjoy doing what I do,” Porter said. “I have a wonderful family and life and don’t have a desire to go anywhere else or look for anything else.”

Although, he has had the opportunity to go somewhere else.

“I value the peace and satisfaction (here) more

than the few extra dollars that might be earned (elsewhere),” Porter said.

Porter and his family moved to Collins Chapel about 11 years ago. This makes for a short commute to Isabella High School, where he has served as principal for the past 15 years.

“It takes me 12 to 15 minutes typically to get here, so I don’t live right on top of the school which, in my opinion, is probably a blessing but at same time I can be here in 10 to 15 minutes,” Porter said.

Prior to becoming the IHS principal, he had worked for a year as the assistant principal at Thorsby High School.

“I had been a drivers ed teacher and P.E teacher … traveling to Thorsby, Isabella and Maplesville for about … five years, so when the position opened up at Isabella I was very familiar with the school and a lot of people at the school,” Porter said.

He said Isabella was similar to Thorsby, so he decided to apply.

Both IHS and THS had kindergarten to 12th grade, and preschool classes have since been added.

“It is quite challenging being the principal at … a pre-K-12 school,” Porter said. “I get to see a wide variety of all of it.”

Each level has different curriculum and assessments.

“It is very rewarding being the principal at a K-12 school or a pre-K-12 school because we get to see them from the beginning as kindergarten students all the way through until they graduate from high school,” Porter said.

The high school graduating class of 2021 had also received their kindergarten diplomas and sixth grade diplomas from Porter.

“(I was able) to watch them all the way through and just to have that experience with a lot of the students and a lot of the families is very rewarding,” Porter said. “It goes right along with our mission statement at Isabella, which is ‘ Growing Tomorrow’s Leaders Today.’”

“We try to approach it (education) holistically from pre-k and kindergarten all the way through to the 12th grade,” Porter said. “There are not a lot of K-12 schools, but it is very rewarding to work at one.”

“I rely greatly on them because it is impossible to be an expert in all of the different areas from K-12,” Porter said. “I have an instructional reading coach and an elementary counselor that does a tremendous job with the details of the elementary. I have a high school counselor, an assistant principal that is focused primarily on the high school side of the building.”

“Delegating different areas of responsibility” helps each school day be a success.

Porter said he still tries to know what is going on with all aspects of the school, “but I don’t feel like I have to personally oversee every little thing that goes on, that would be impossible.”

A desire to coach is what initially piqued Porter’s interest in working in education. His coaching career includes Jemison High School and later Thorsby High School.

“I have coached every sport: football, basketball, baseball and softball,” Porter said.

At THS in 2004, he was the athletic director and head football coach before taking the THS assistant principal position.

“My goal always was to be able to make a difference in the lives of my players and my students, help them be the best that they could be, not only as athletes or students but also as adults once they leave high school,” Porter said.

He is in his 29th year as a Chilton County educator. While many may start to look to retirement at that point, Porter said he is still enjoying his career.

Porter and his wife Julie have three children. All of them attend Isabella, and they will be starting fourth, ninth and 10th grade in the 2021-2022 school year.

“I enjoy coming to school every day with them,” Porter said.

Of Julie, Porter said, “I married the love of my life.”

The couple met through her family members that coached with Porter.

“I got to know her and her family really well, and it just kind of grew from there,” Porter said.

They initially met while Julie was still in high school, but started a relationship after she graduated.

When not at IHS, Porter enjoys spending time with his family and serving at The Church at Robinson Springs.