From paralyzed to a dream realized:Blake Shirah’s journey to founding a college football program 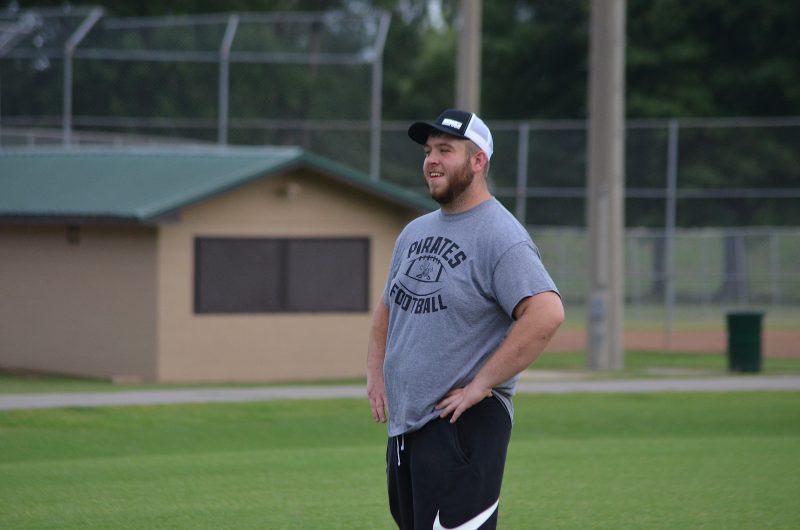 Blake Shirah founded and will coach the Chilton Prep Academy Pirates. He overcame much adversity, like being paralyzed from a car accident, along the way to founding the program.

Story and photos by ZACHARY SEIFTER

He could barely keep himself awake. He was surrounded by smoke. Glass and blood covered his body.

A woman came up to his smashed-in door to get a look at him. She turned her attention to the car floor, and her face turned pale in an instant. The only thing she could say to him was “don’t look down.”

Naturally, his curiosity was piqued, so Blake Shirah looked down, and what he saw would haunt his dreams forever.

It was his legs torn to bits, brutalized by multiple broken bones, and a pool of blood spilling out onto the car floor.

Even though he could see that his legs were destroyed, he could not yet feel it, and that realization was scarier than anything else.

He did not know it yet, but Shirah was paralyzed from the waist down. A drunk driver wrecked his car, and his body, to bits. He survived, but his career as a football player was over, and he was faced with the reality of multiple surgeries, physical therapy and the possibility of never walking again.

A few years prior, Shirah was a local football player, and recent Chilton County High School graduate. During his time at CCHS, the offensive lineman dominated on Friday nights, and he received an offer to play college football at Huntingdon College in Montgomery. He played there for a few years, and after graduating had the chance to play professionally in the Indoor Football League (IFL).

After a year there, he felt like he needed a change, and change was presented to him in many different forms. He began coaching high school football at Calhoun High School. He also started a semi-professional football team in Chilton County called the Chilton Tigers.

The number one thing on Shirah’s mind though was giving back to the Chilton County community. He saw the struggles of young people, particularly young athletes in the county. He knew many of them had the talent to play sports beyond their high school years, but could not make it happen, so they never got a college education.

Shirah sought to change that, starting a nonprofit organization that worked to give Chilton County athletes the opportunity to play college sports and receive a college education. He dreamed one day of beginning his own college football program in the county.

That dream would have to wait though. After he was finished playing in the IFL, Shirah received another opportunity to play football, this time internationally in Mexico. He wanted to keep playing, so he seized his chance to continue his playing career.

While training before the move, Shirah worked as a solar panel salesman. His work took him across the Southeast, and eventually to Panama City, Florida, where he unknowingly worked his last days on the job.

One night after work, his co-worker wanted to go out for drinks. Shirah was not in a drinking mood, but he wanted his co-worker to be safe, so he offered to drive. They were on their way back home when they came upon a hill.

In an instant, his life changed forever.

“I was in the far-right lane, and came over the hill, and as soon as I came over all I saw were headlights … 60-something miles an hour hit head-on,” Shirah said. “All I knew is I couldn’t feel my legs, and I knew that it was really bad.”

It took the paramedics over 30 minutes to get Shirah out of his car. The engine had been smashed into Shirah, burning his hands. He had glass all over his body. He not only broke both of his legs, but also his hip and multiple ribs.

In the ambulance, Shirah was in desperate need of blood. He had lost so much that his veins had shriveled up, so the paramedic had to come up with something else to get Shirah an IV.

“He told me, ‘Look man, I’ll be honest with you, this is going to be the worst pain you ever feel in your life, but we’re doing this to save your life,’” Shirah said. “So, they had to take an eight-gauge needle, and they drilled into my collarbone with no pain medicine, nothing to numb it, nothing.”

Once at the hospital, Shirah was surrounded by doctors. He was rushed to emergency surgery, but not before he could sign a waiver clearing the hospital in case they had to amputate the leg, all while falling in and out of consciousness.

He did not know if he would wake up with one leg or two, but Shirah fell asleep one more time, hoping for the best.

The doctors saved his leg. However, when he woke up he still could not feel them on the surface. He was paralyzed from the waist down. But, he could feel the pain inside his leg caused by his broken bones. That was not the worst news of that day though.

“The doctors told me ‘You have a very slim chance of ever walking again,’” Shirah said.

Things looked bleak for the former CCHS offensive lineman. He was faced with a choice. He could either accept what the doctors told him, and live out the rest of his days in a wheelchair, or fight to walk again.

He made up his mind, and chose to rehab.

The rehab process was slow. Shirah began just by doing small physical therapy workouts to build up strength in his legs. He got to the point where he could get himself out of bed and into his wheelchair. He kept getting better and better, but rehab came with other challenges besides physical ones.

Shirah was questioning himself and God, looking for a reason why this horrific accident would happen to him.

“The whole time that I was in the hospital and couldn’t get up I was like ‘Why?’ I know I’m not supposed to, but I questioned God. ‘Why me? Why did you do this to me? Why did you save me just to make me like this?’”

Shirah reflected on those questions for some time, but he eventually found his answer. He turned back to that dream of starting a college football program in Chilton County, and soon after receiving a settlement check from the accident, he had what he needed to get a program started.

While trying to get the program off the ground, Shirah finished rehab. He overcame more obstacles to get to the end, being told that it would take him at least a year to be able to get himself out of a wheelchair and walk. Just months after the accident, Shirah was walking on his own without any support.

Now able to move around, Shirah was able to fulfill one of his promises. Not only would he start a football team in Chilton County, he was going to coach it. He turned to an old friend, CCHS football coach Tal Morrison for support. Morrison helped Shirah start the Chilton Tigers semi-pro team, allowing them to play in the CCHS football stadium. When Shirah called him to explain his ideas for a college football program in the county, Morrison was once again ready to give a helping hand.

“Goals of his [Shirah] are to see young men from this area be able to reach goals that he might have achieved with getting the opportunity to play college football,” Morrison said.  “He wants to give them another avenue to be able to potentially reach some of those goals … He’s alumni, and we want to help in any way we can with our alumni and guys that played here,” Morrison said.

CCHS once again granted Shirah access to the football stadium for his college team, which he named the Chilton Prep Academy Pirates. Shirah received approval from the Chilton County Board of Education to use the stadium as well.

Shirah faced other obstacles though. He had a team, but didn’t have a school for his players to attend. However, he was able to pair up with some local community colleges such as Jefferson State to get his players into school while playing for the Pirates.

He also created a scholarship fund for his players using the money from the settlement. That money goes to tutoring, ACT prep and the conference fees that each player is charged, among other things.

“Football is great, but football is just a motivator,” Shirah said. “These kids they play football, but these kids are getting their education … They’re not in the street, they’re not doing things they’re not supposed to do. They’re in school, and they’re playing a sport to keep them involved in that school and keep their grades right.”

While the program is starting out with just a football team, Shirah hopes that it grows, and he is able to expand in the next few years to include multiple sports like baseball, softball and volleyball.

For now though, he is focused on the Pirates football team, who will be trying to establish themselves in their first year of play.

For Shirah, he will also be trying to establish himself as a college football coach. He will try to make the most of his second chance at life with this program, all while using the worst experience of his life to make a positive impact on the Chilton County community.