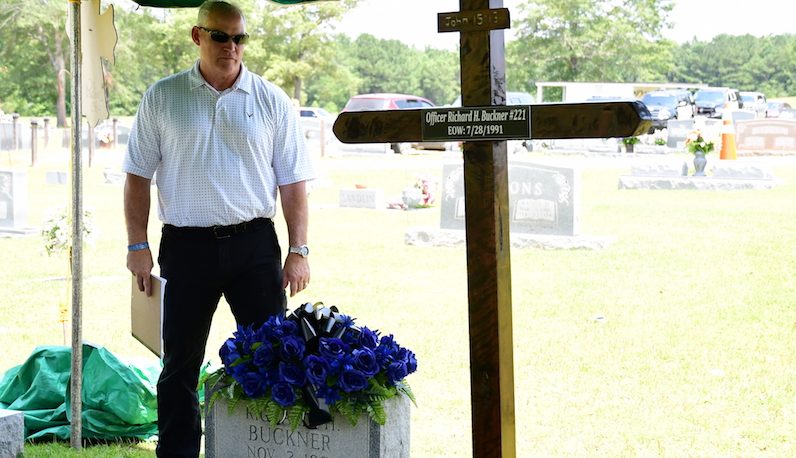 John Stephens at the grave of Officer Richard Buckner who died in the line of duty on July 28, 1991. (JOYANNA LOVE/ ADVERTISER)

Buckner died in a traffic accident while on duty responding to a call on July 28, 1991.

John and Cindy Stephens organized the event as a way for friends and family to share stories and remember him. John Stephens was responding to the same call the night Buckner died.

As attendees told stories, Buckner was remembered as a fun person with a big heart and a love for Chilton County.

“He was so fun to be around,” John Stephens said.

“We do miss him a lot,” Keith Maddox, former CPD chief, said.

The event was held near his grave and culminated in the unveiling of a new memorial to mark the spot where he died in the line of duty. The cross will be placed at the telephone pole where the accident occurred.

The memorial was created by CPD Capt. David Clackley. He said he had started searching for “the perfect piece of wood.”

“Then, it hit me, it wasn’t the right fit,” Clackley said. “As a police officer, you are going to have your bumps, your bruises, your scars … so to me it was more symbolic than if it was a pristine piece of wood.”

There are also plans in the work to have the section of Interstate 65 from Exit 205 to 208 named the Officer Richard Buckner Memorial Highway.

“That way when everybody passes by, they will see his name, and it will be a way that people will know that he gave the ultimate sacrifice,” John Stephens said.