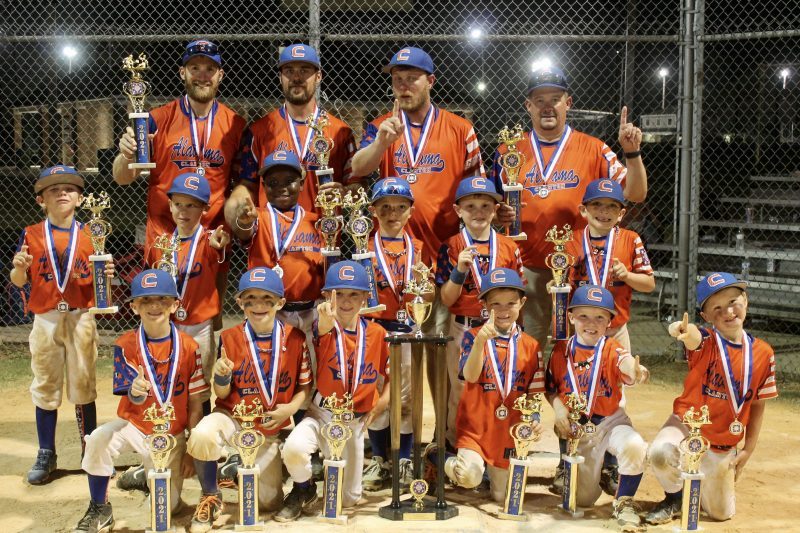 The Clanton 6U All-Star team won the Regional World Series in Texarkana, Arkansas on July 25. The team finished its season with a perfect 19-0 record. (ANDY SMITH/ CONTRIBUTED)

That is what was achieved by Clanton’s 6U All-Star team on the baseball diamond in Texarkana, Arkansas on July 25.

The team competed in the Regional World Series from July 23-25, winning seven straight games to finish off a magical run this summer.

No, not every at-bat was perfect. Not every defensive play or base running decision was perfect either. But at the end of it all, the team’s record was a perfect 19-0, and they capped off their perfect season in a perfect way, celebrating as champions.

“It’s a huge accomplishment,” said Clanton head coach Trent Grey. “… To be six years old and to accomplish what that group of boys did, to go 19-0 is unbelievable. For that young of an age group to understand the magnitude of what all that meant is a testimony to how special this team really was.”

Clanton’s offense once again led the way in the tournament. The team scored a total of 114 runs in the seven games played, an average of over 16 runs per game.

Noah Ford led Clanton’s offense, racking up 18 RBIs in 19 at-bats for the team, including a whopping six RBIs in the championship game, a 14-6 victory over the Greenbrier Tennessee’s 6U team.

Also contributing on offense was Parker Ellison, who brought 14 runs home over his 16 at-bats in the tournament. Micah Lynn, Max Chambers and Charlie Smith all had 11 RBIs each in the tournament as well.

While the offense was going strong, the defense did more than enough to help Clanton win games. In total, Clanton gave up just 35 runs in the seven games, giving the team a run differential of +79. The margin of victory was over 11 runs per game.

“I would put our defense up against any 6U defense around,” Grey said. “Lights out infield … outfield played awesome. No balls got by them.”

This Clanton 6U team will go down as a great one, and while the players and coaches are the ones that got things done on the field, many others contributed to its success. Special bonds were created throughout this championship run, and this team will walk together forever.

“Thank you to everyone that sponsored us to help us get to where we are,” Grey said. “We couldn’t have done any of this without any of the sponsors. All the mommas of this team have been tremendous … This has been a special group of boys and coaches and families. We have all built a bond together … We [coaches] feel like we all gained 12 sons this trip.”