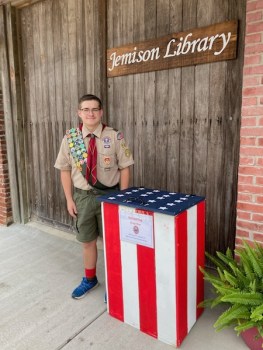 Patrick Garrett next to his box outside of Jemison Public Library. (PATRICK GARRETT/ CONTRIBUTED) 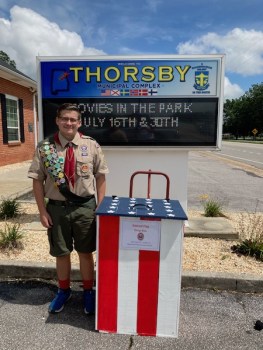 atrick Garrett stands next to his box outside of Thorsby City Hall. (PATRICK GARRETT/ CONTRIBUTED) 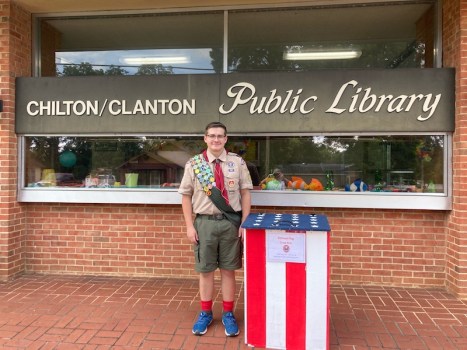 Patrick Garrett stands next to the box he built outside of the Clanton Public Library. (PATRICK GARRETT/ CONTRIBUTED)

Becoming an Eagle Scout is one of the highest honors one can receive when a part of the Boy Scouts.

Only about 8% of scouts ever reach that point as of 2019, according to the Boy Scouts of America website, and one Chilton County native is well on his way to achieving that feat.

Patrick Garrett of Jemison has been in the Boy Scouts for years. He has worked to achieve many honors and collect many badges over the years, but is now on the brink of becoming an Eagle Scout.

In order to reach that status though, he had to complete a final service project. It had to be meaningful, and help Chilton County. It did not take him long to find just the thing.

“I built three boxes that are [used] to collect old flags that need to be retired,” Garrett said. “Then my troop will come by to collect those flags and then have a retirement ceremony.”

He created the boxes with the help of Marvin’s Building Materials in Calera and the Lowe’s in Alabaster. Those boxes were then placed in three different locations: the Jemison Public Library, the Clanton Public Library and Thorsby City Hall.

A proper retirement ceremony is almost like a funeral for the flags. They are honored and then burned to ashes before being buried in the ground.

For more information, one can call any of the three locations where the boxes are located.