How Jemison established its ambulance service 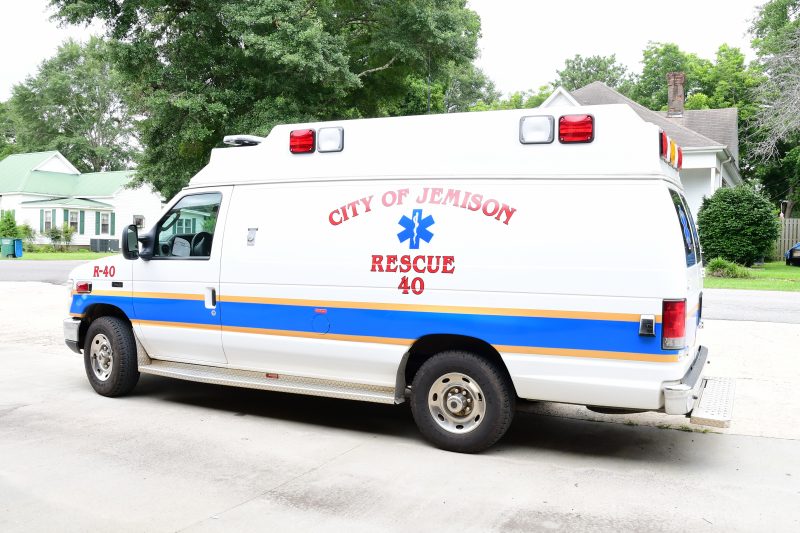 Jemison is the only fire department in Chilton County that has an ambulance. (JOYANNA LOVE/ ADVERTISER)

In a recent Chilton County 911 Board meeting, concerns were expressed that if Shelby County ever stopped using Regional Paramedical Services, then the company would pull out of Chilton County.

If this happened, the options for Chilton County would be to start its own ambulance service to transport patients or pay another company a subsidy, so that it could make a profit.

Jemison established ambulance transport as a part of its emergency response in 2013.

“Our city wanted to be able to provide … better all comprehensive medical care for our citizens,” Jemison Fire Chief Dennis said. “And transporting was one of those ways to get that better, faster care.”

It is the only municipality that has an ambulance.

“As paramedics, we do all kinds of great and wonderful things, but true definitive care is at the hospital,” John Dennis said. “And, A lot of times, time is of the essence.”

Timing was an issue as paramedics would be on a scene waiting for an ambulance to transport.

“We were already running the call waiting on the ambulance, instead of just waiting now we were able to evaluate a patient and quickly make a transport,” Dennis said. “… Getting to the hospital in a timely manner was important to us. We were able to provide better care to our citizens in a more timely manner by not having to wait.”

Since ambulance companies often serve multiple areas, Dennis said there was the potential to be waiting awhile if all of the areas served were busy.

The Jemison ambulance was purchased through a four-year lease agreement for $106,000, Dennis said. The department now has two ambulances and typically has one staffed and one as a backup. However, staffing is such that both have been used in the same shift at times.

While insurance reimbursement pays for the majority of costs associated with the ambulance, Dennis said the department also receives funding from the city of Jemison.

There is an average of 50 patient transports in Jemison each month.

“We don’t make that many because sometimes we are on another call, and RPS makes those for us,” Dennis said.

If RPS ever left Chilton County, Dennis said Jemison would have to find another company or service to serve as its backup.

“We started slow,” Dennis said. “We first started transporting Monday through Friday 8 to 4 with limited personnel, and then we expanded that to 24 hours a day seven days a week.”

A Staffing for Adequate Fire and Emergency Response grant was secured to pay for staff for the ambulance as the service was transitioning to full time.

This expansion also made Jemison the only 24 hour staffed fire station in Chilton County with a minimum of three employees for most of those shifts.

“We are able to staff our people and pay them 24 hours a day by the reimbursement we get from insurance for transport services,” Dennis said.

The ambulance only responds to emergency calls.

Transport calls can take a while depending of which hospital the patient needs to go to. Dennis said this is determined by which hospitals are available to treat the specific need closest to the incident, and where the patient wants to go.

“We encourage them to go to the most appropriate place, but overall the patient has the right to choose,” Dennis said.

The fire department responds to about 150 calls for fire and medical a month.