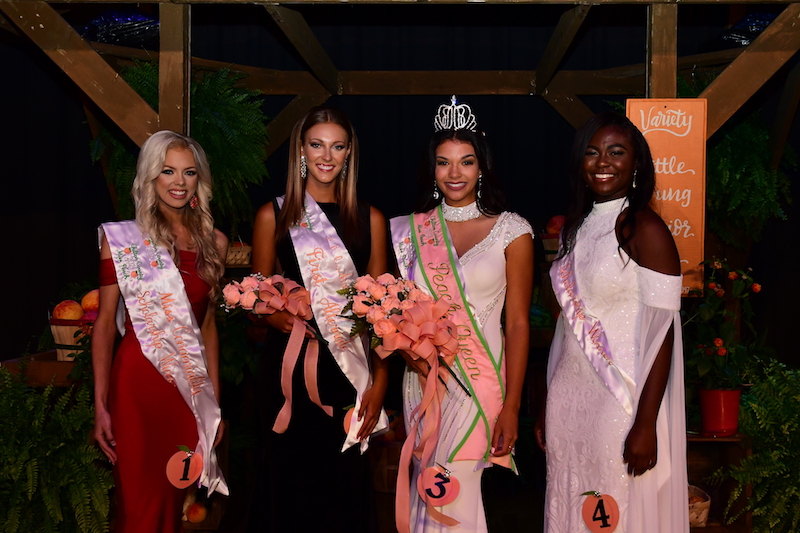 The Miss Peach Pageant on June 24 was one for the Peach Festival history books.

Halle Sullivan of Clanton became the first person to be crowned Miss Peach Queen that had also held the other three titles: Little, Young and Junior.

“I just made history” was what Sullivan said was going through her head when her name was called as the 2021 Miss Peach.

Her experiences in the pageant and as the younger queens kept her coming back.

“The sisterhood that this pageant creates is so strong and so powerful,” Sullivan said. “My nana was actually the one who inspired me to do Miss because I almost didn’t. If it wasn’t for her I wouldn’t be up here.”

She was also the Casual Wear winner.

She is looking forward to “being the one that picks out all the clothes” and creating a platform for the queens that they develop themselves.

“I am really looking forward to brainstorming ideas with my queen sisters to see what we come up with,” Sullivan said.

She chose Kru’s Kloset/ Threads of Love as her platform to support their efforts to help grieving mothers who have lost a baby.

In addition to the Miss Peach adventures, Sullivan is planning another peach first for herself — trying peach cobbler.

Sullivan received a $2,000 scholarship with the title. She also received the River Bank & Trust Scholarship for $500.

First Alternate Annabel Mullinax received a $1,000 scholarship from the Clanton Lions Club and the Exit Royal Realty Scholarship for $1,000.

Alyssa Zeigler was awarded the St. Vincent’s Hospital Scholarship for $1,200.

Many of community scholarships required the contestants to write an essay on a given topic.