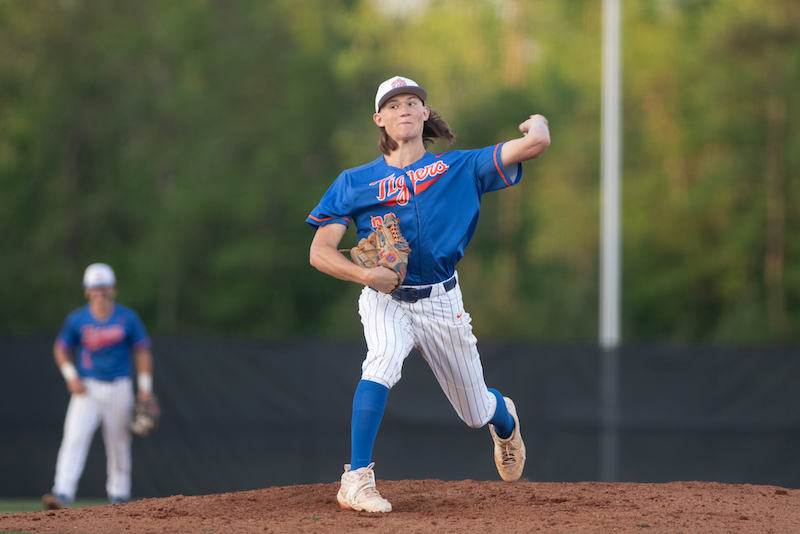 Pico Kohn is the 2021 Chilton County baseball player of the year. Kohn dominated from the mound, finishing the season 9-2 with a 1.17 ERA. (FILE)

Kohn is coming off a superb senior season, one in which he showed that he was the most dominant pitcher in the county. He was a star on the mound, but he also made his presence felt in the batter’s box.

On the offensive side, Kohn had a .302 batting average, hitting four home runs, which tied for the team lead, and 17 RBIs. He also walked 19 times.

“Pico has been with us for four years, and we knew as a freshman when he came up and pitched for us, he worked into being our number one at the end of his freshman year,” CCHS head coach Ryan Ellison said. “We knew that the following three years were going to be some years where we could win some games with him on the mound for sure, and each year he got better and better … he came back this year with a lot of high expectations, and he didn’t disappoint.”

Kohn played a massive role in the Tigers’ playoff run to the state quarterfinal. His consistent dominance on the mound gave the CCHS team confidence every game he pitched that they could win. It got to the point where they expected to win with him on the mound rather than hoped.

“If we score one or two runs, we have a very good chance to win,” Ellison said.

With all of the great years Kohn has given the CCHS team though, his time as a Tiger has come to an end. His time on the mound is far from over, however, as he is committed to Mississippi State University to play baseball.

“He’s got a lot of options out there right now,” Ellison said. “He did have some pro scouts that were coming to just about every one of our games, there was at least one or two that were there … If he doesn’t get drafted or if he doesn’t choose to go into the draft, he’s going to pitch at one of the highest collegiate baseball levels that there are.”

There are few doubts that Kohn has an extremely bright future in the game of baseball. With this high school days now behind him, he will look to the excellent career that could be ahead, and everyone is excited to see what he does.

“We’re going to miss him,” Ellison said. “He’s been a staple for our program the last four years, and I wish him the best. I can’t wait to see what the future holds for him.”