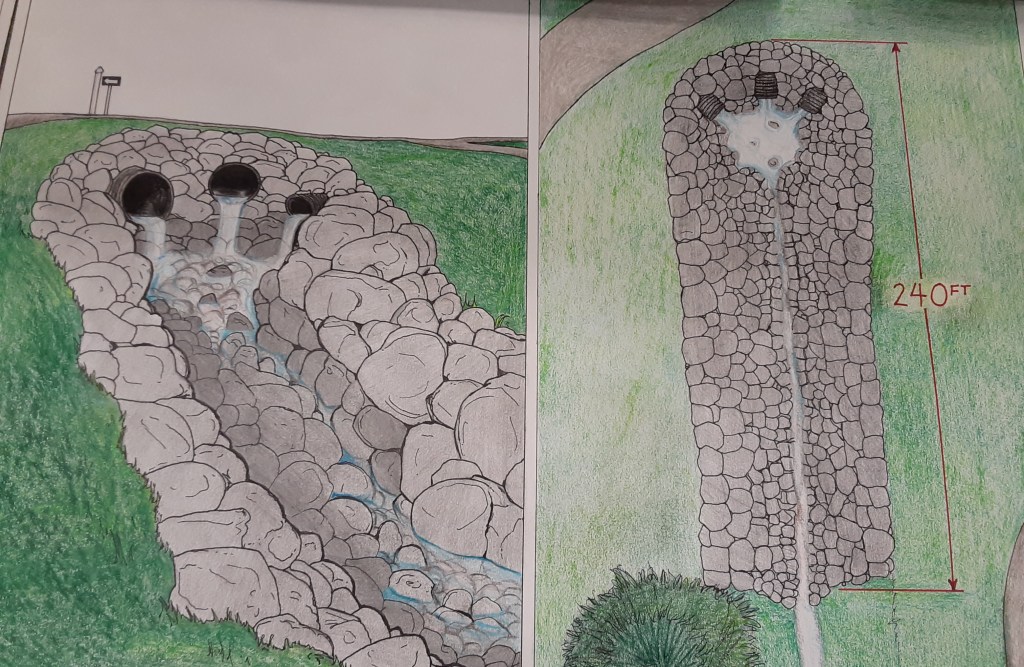 An artistic rendering of the solution to fix erosion in a drainage ditch at Jemison City Park. (CITY OF JEMISON/ CONTRIBUTED)

The Jemison City Council has committed $31,000 to address erosion in a drainage ditch which has created a safety issue at Jemison City Park.

A unanimous vote to fund the project was made during the June 7 meeting.

The city plans to use money in its reserve and reimburse it from FEMA funds that it expects to receive.

City Clerk Vicki Potts confirmed that the reserve fund could pay for an expense of this amount. City Administrator Shannon Welch said the city has applied for up to $150,000 from FEMA as reimbursement for expenses from last year’s severe storms.

Drawings of the drainage pipes and the proposed solution were presented City Superintendent Steve Langston. Drainage pipes in the park allow rain water to flow into a ditch. Langston explained that 240 feet of this ditch has eroded making the water 10-12 feet deep at some points.

“It has become such a safety issue, not only for our citizens who enjoy the park, but it is creating a maintenance nightmare,” Langston said. “It is even dangerous to be in the edge of it to weedeat it.”

He said heavy rain fall in the last two years has caused the erosion, and it would only get worse. The water pressure created by having three pipes converge in a small space also contributes to the safety concerns.

The assistant engineer for Chilton County worked with Langston to develop this solution.

Chilton County crews would do the actual work.

“If we don’t do something, someone is going to get hurt,” Langston said.

A barrier will also be added to a curve in the road that is near the ditch.

The project is expected to take up to three weeks to complete.

Mayor Eddie Reed said the improvements were a necessary expense for the council.

Reed said the park is being enjoyed by more people now that there is someone full-time dedicated to maintenance and upkeep there.

Langston also presented information on a stone and metal sign he wanted to donate to the park to create an attractive entrance to the park.

A work session to discuss larger capital projects is being planned for the City Council to discuss how it can use American Rescue Plan funding.

Welch said he expects the city will receive about half a million dollars in federal American Rescue Plan funding.

Several projects were mentioned as needs, but the work session would provide a time for detailed discussion.