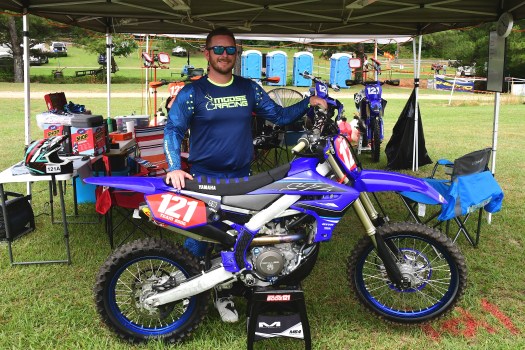 Jordyn Dubose preparing for his turn on the track. (JERRETT POSEY/ ADVERTISER) 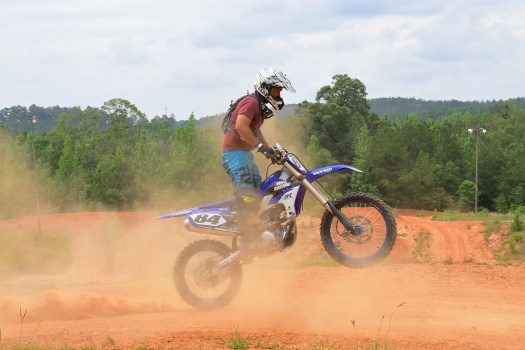 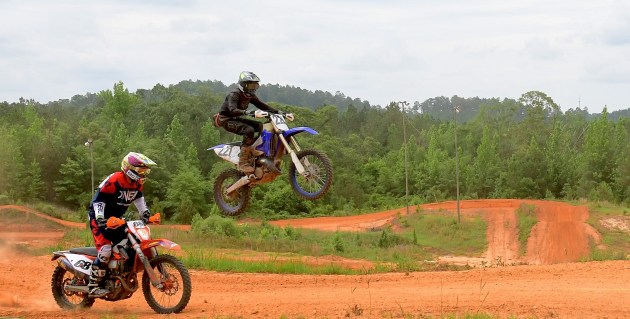 The racers lining up for the Pledge of Allegiance. (JERRETT POSEY/ ADVERTISER)

On June 5 and 6, Perry Mountain Motorcycle Club held their 24 Hour Challenge in Plantersville.

Competitors could race as individuals, duos, four man teams or six man teams. Those competing as individuals would only stop a few times during the 24 hours, while the larger teams allowed for longer breaks before returning to the track. Many of the teams had a rotation plan going into the race, according to Matt Welch of team Five Pistons and a Flux Capacitor.

“Our plan is to start with two laps apiece and then we will adjust it from there,” Welch said.

No matter how large the team was there was still a lot of racing to be done by each individual. This can be very taxing on the competitors, especially those with less experience during the night portion of the race, according to Jordyn Dubose of Team Boog.

“You try to plan it out for who is on a bike and when,” Dubose said. “You don’t want someone less experienced to go out multiple times at night.”

This is a long and strenuous race where things could go wrong quickly according to Marc Jeffers of Team Nasty Fast. Jeffers said this was his second time at Perry Mountain, and the last time did not go as planned.

“Last time, I left in a helicopter going to UAB’s Trauma Unit,” Jeffers said. “But I’m back to do it again, I just couldn’t quit.”

He was treated for a broken femur after the 2019 24 Hour Challenge. Despite the dangers, racers come to compete and enjoy themselves every year. Jeffers said that many of teams have become like family.

“We have raced against some of these guys for years,” Jeffers said. “Once you get into it, you have friends all over the country. If I ever need anything, I know they will help me out and if they need something, I’ll help them.”