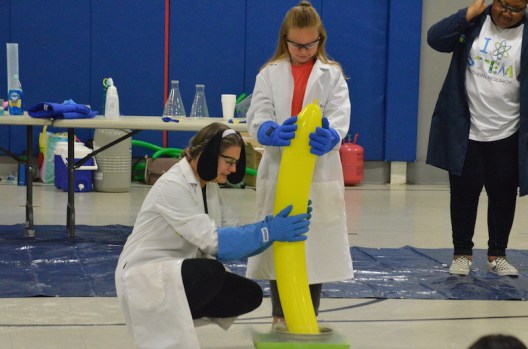 Dr. Liz Johnson gets a JIS student involved in an experiment during the STEM presentation. (ZACHARY SEIFTER/ ADVERTISER) 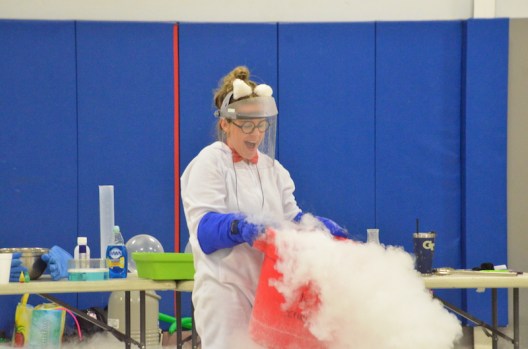 Dr. Kathryn Lanier shows off a bucket with a cloud in it that was created in an experiment during the presentation. (ZACHARY SEIFTER/ ADVERTISER) 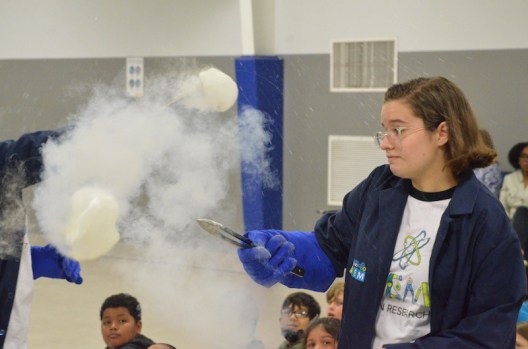 A balloon pops due to the expansion of gas in the balloon during the STEM demonstration. (ZACHARY SEIFTER/ ADVERTISER) 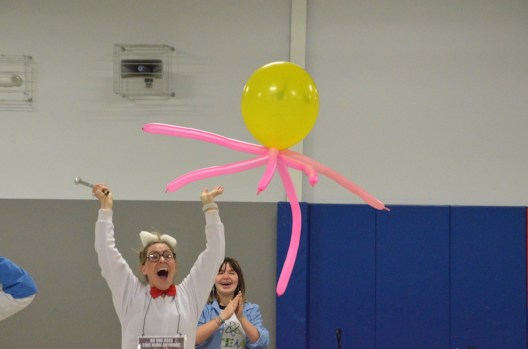 A balloon begins to float in the air after expanding from heated gas in the balloon. (ZACHARY SEIFTER/ ADVERTISER) 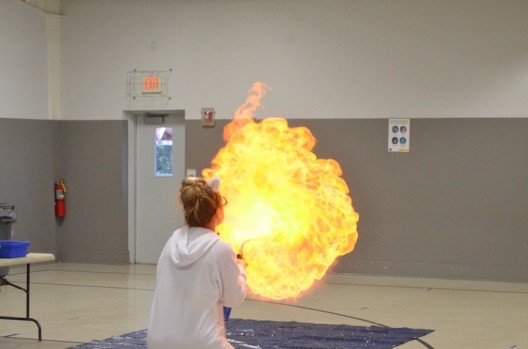 Dr. Kathryn Lanier blows corn starch into a flame to create a fire ball in the air as part of the STEM presentation at JIS. (ZACHARY SEIFTER/ ADVERTISER) 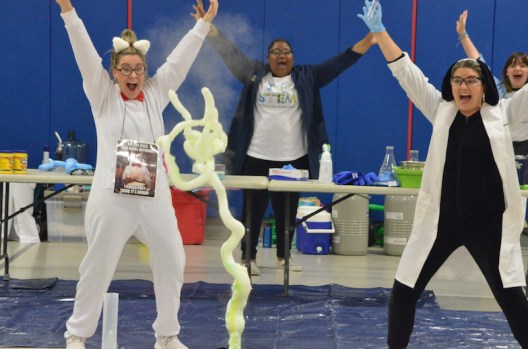 Dr. Liz Johnson and Dr. Kathryn Lanier came to JIS from Southern Research to do a STEM presentation for the students at JIS. (ZACHARY SEIFTER/ ADVERTISER)

Jemison Intermediate School hosted chemists from Southern Research to put on a STEM demonstration for the students on May 25.

The chemists, Dr. Liz Johnson and Dr. Kathryn Lanier, conducted a series of fun and interactive experiments during the presentation to show the students that science can be extremely interesting.

“Our first goal is getting them [students] engaged and excited, get exposed to STEM,” Johnson said. “Then further from that we want to provide them opportunities to know what they can do with a passion in STEM. How they can further their academic career goals and career goals, whether they want to become scientists like us or do something different.”

Next, they moved on to experiments that involved items a bit colder than fire. They conducted an experiment showing how gases expand and contract. They put blown up balloons in extremely cold states to show how the balloon deflates even though it does not lose any air. Then when it heated back up, the balloon would begin to inflate.

They finished the presentation with an experiment in which they mixed chemicals to create a cloud, which the students found extremely fascinating.

The result of the experiments was Johnson and Lanier succeeding in their goal of getting students engaged and excited.

“I would like to see our students find a passion for science-related careers,” JIS science teacher Jacque Burkhalter said. “I read an article that [said] most people determine their career in fifth grade, and I’m a fifth-grade teacher. So, it’s important to me to expose students to different careers so they can get their passion lit early in life.”

Johnson and Lanier will continue their presentations at JIS on May 26.