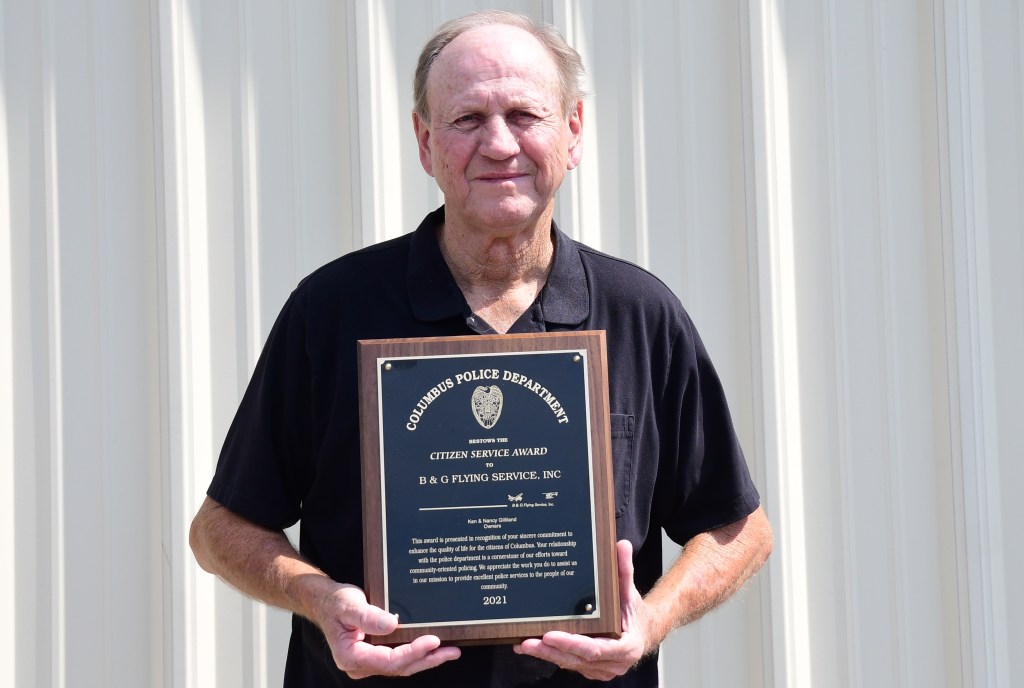 The company owned by Ken and Nancy Gilliland is stationed at the Chilton County Airport, but has helped multiple police departments, including the Columbus Police Department set up aviation units.

Helping police departments is something Ken Gilliland is passionate about. In the decade he has been doing it, he has been recognized by local and state leaders, but this is the first recognition from outside of Alabama. He said he volunteers his time, so the departments’ budget can go further.

Columbus Assistant Police Chief Debra Kennedy said the department has an annual awards ceremony where outstanding officers and businesses or individuals that support the department are recognized.

Ken Gilliland had been influential in helping a multi-state and multi-agency task force Kennedy was working with develop an aviation unit in 2015.

“I relied heavily on him because I had no aviation experience,” Kennedy said.

She said Ken Gilliland saw helping the department as a way of giving back and helping others, which was evident by how he went above the normal maintenance contract to help the department.

He is now helping the Columbus Police Department determine how to sell the helicopters as the unit is disbanded and the department takes a different approach.

“He is a really good guide,” Kennedy said.

B&G Flying Service opened in 1998. In 2012, the company began assisting police departments in setting up aviation units that could do infrared surveillance to find illegal drugs, etc.

“It was very successful,” Ken Gilliland said. “We were able to do it without pulling any tax payer money.”

The program is no longer used.

“Over the past 10 years, I have probably trained eight pilots and four wayside officers,” Ken Gilliland said.

Some of his former students have stayed in touch.

Ken Gilliland’s interest in aviation grew out of his time in the U.S. Air Force during the Vietnam War and Operation Desert Storm. He had been drafted for Vietnam but wanted to avoid the infantry, so he took the option available of testing into another branch. He said he was involved in training missions towards the end of the Vietnam War and eventually went into aircraft maintenance.

After retiring from the military, he returned to Alabama and eventually came to Chilton County to be closer to family.

While there are some local customers, the majority of the business B&G Flying Service does is with pilots from outside of the county and many are from outside the state.

“I’ve got customers from Arizona, Texas, Mississippi, Oklahoma, Arkansas, Illinois (and) Georgia,” Ken Gilliland said. “… Most of what I do here is called owner assist. They are restoring and rebuilding (aircraft), and I help them with that.”

Courtesy cars at the airport allow those from out of town to leave the airport and experience Chilton County.

Most customers are general aviation.

An on-demand charter flight service was started in 2003, and some business is generated doing banner pulls.

In addition to helping police departments, the company also assists with mobile air control for the forestry service and aerial photos of storm damage when needed.