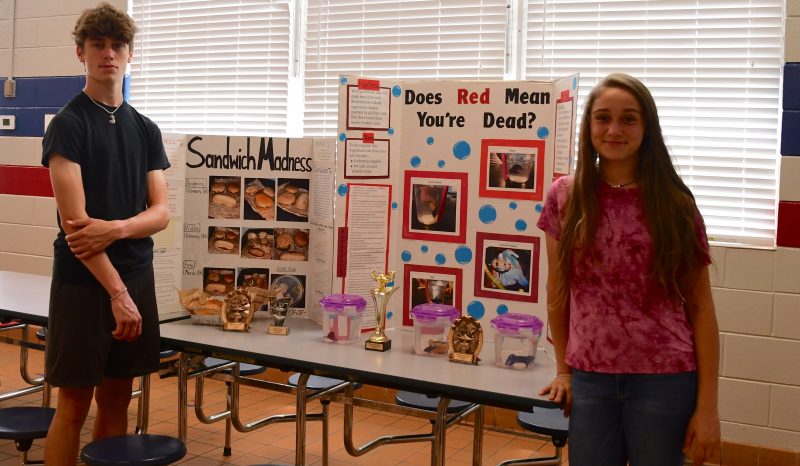 Verbena High School celebrated students’ scientific studies with its first science fair and awards on May 18.

Some students worked in groups, while others took on a project as an individual.

Best in Show for the 10th/ 11th division went to Alexis Smitherman, Austin Cochrane and Ethan Dopson for their project exploring aggression in betta fish.

“She said that we could try to associate color with aggression, and this is what we came up with (using) betta fish,” Alexis Smitherman said. “We did weekly trials for each fish. We held up a mirror to the containers of each for a minute.”

The time a fish was aggressive was recorded. An ANOVA test was used to determine if there was a statistical difference between fish of different colors, and whether this difference was significant. The ANOVA test proved to be the most challenging part of the project for both Alexis and James Smitherman.

“I wanted to do something different to show how unhealthy fast foods can be for people,” James Smitherman said.

He set three fast food sandwiches on a counter and recorded the rate of decomposition.

“I thought it would take like a week to decompose, and they didn’t decompose,” James Smitherman said.

However, when he put the food on a bacteria plate, bacteria did show up, he said.

He said mold did not show up on the food “because of the processes” in making it.

James Smitherman said he enjoyed showing “how unhealthy the sandwiches are, and they are not good for people” because it did not decompose the way organic material should. He wanted the project to encourage people to “eat more natural and good foods.”

“I thought it was interesting to see the fish, how they reacted and the difference in between,” Alexis Smitherman said.

The group found that the blue fish was the least aggressive of the three-colored fish, but there was no difference between the red and black fish.

“So, we had to reject our hypothesis,” Alexis Smitherman said.

The hypothesis had been that the red would be notably more aggressive.

“To see which one is more aggressive between the black and the red we would have to run further tests,” Alexis Smitherman said.

All of the students used the scientific method to form a hypothesis, experiment and record results.

Davis said the science fair will be an annual event moving forward.