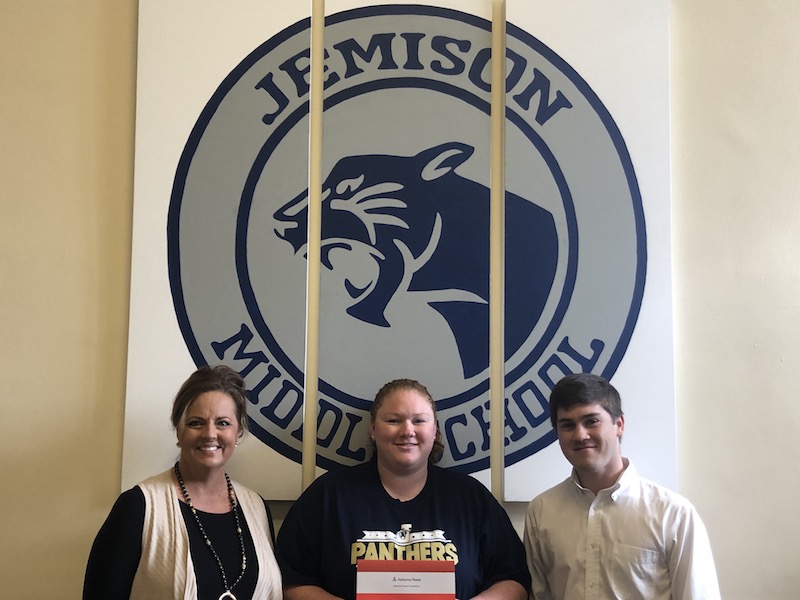 Jemison Middle School Principal Christy Mims and Rachel Holmes receive the Power to Play grant from Alabama Power. The grant will be used to help lower the price of the spirit fee for players on the boys and girls basketball teams. (ALABAMA POWER/ CONTRIBUTED)

Jemison Middle School was one of three Chilton County schools to be given a Power to Play grant from Alabama Power.

JMS received $2,000 from the grant, and will be using it to support its basketball teams.

“It’s going to help our students lower their cost for their spirit tax by about $150,” Rachel Holmes of JMS said. “That’s pretty exciting.

The spirit tax is a fee that players on the boys and girls basketball teams pay to receive equipment such as shoes, shirts and bags, among other items, for the season.

The regular price for the spirit tax is usually north of $200, but with the grant that price will most likely come down to around $85, according to Holmes.

“We were very excited,” Holmes said. “That way, the students didn’t have to pay quite as much, especially after the year that a lot of people have had with COVID. We knew they might not be as able or willing to pay that much to play. So, we were hoping that by lowering the cost we would have more people tryout to play for us this year.”