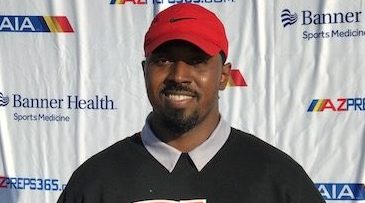 The Chilton County High School football coaching staff has a new addition, and it is a big one.

CCHS has hired Rishard Davis as the new offensive coordinator for the team.

Davis, a former football player at Maplesville High School, is coming back to Chilton County from Arizona, where he coached Santa Cruz Valley High School to a state championship as head coach this past season.

“We’ve been communicating for several months, probably as early as November,” CCHS head coach Tal Morrison said. “Just talking back-and-forth on what opportunities we had here. Rishard was looking to get back home.”

Davis not only played football at Maplesville, but he finished out his college playing days at Huntingdon College in Montgomery following a stint at Arizona State, where he played as a walk-on.

The move back home comes despite incredible success at Santa Cruz Valley for Davis. He had a career record of 58-21 in seven seasons as the head coach, leading his team to two state title game appearances, and, of course, the one state championship victory.

The hope is that he can bring his winning ways and winning mentality back to CCHS, something the team has needed.

“I think that’s huge to have that experience and that mentality within the staff and on the staff,” Morrison said of the winning culture Davis brings with him. “Then [we] work to instill that into our players.”

Davis will work to improve an offense that averaged just over 14 points per game in 2020. The offense was a big reason why CCHS stumbled to a 1-9 record and lost eight straight games to end the regular season.

A physical mentality and a desire to establish a strong run game are key components to Davis’ offense. They will be big components as to whether CCHS has any offensive improvement in 2021. It will be a challenge, and there will be growing pains.

But if Davis’ past is any indication, the Tigers’ offense has a very bright future.