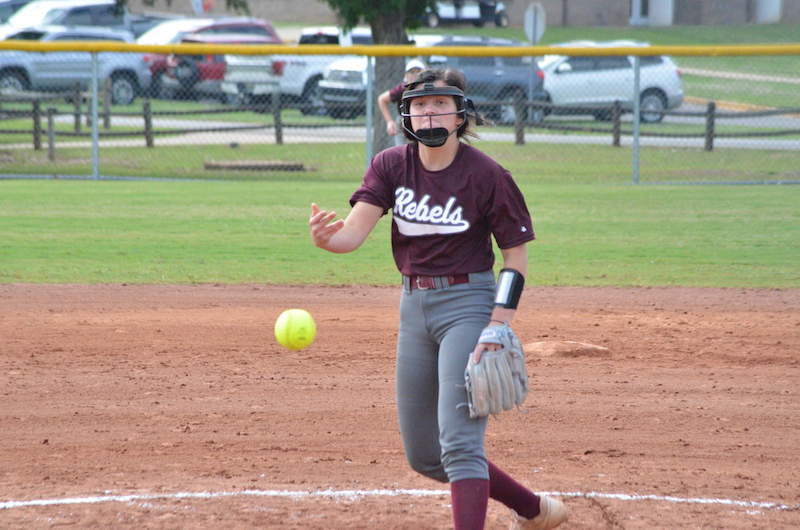 The Thorsby High School softball team was eliminated from the 2A Regional Tournament on May 14.

After winning two straight games to reach the loser’s bracket final in the tournament, the Rebels fell to Lamar County High School by a score of 8-3, ending their season.

Thorsby began the tournament on a strong note, taking down Highland Home High School by a score of 8-4. Thorsby was carried by a strong offensive performance as the team posted 15 hits in the game as well as walking one batter.

However, that offensive success did not carry over to the next game. After going toe-to-toe with Sumiton Christian High School for nine innings, Thorsby gave up six runs in the 10th, breaking a 0-0 tie. The Rebels managed just four hits in the 6-0 loss.

The disappointing loss may have been a source of inspiration for Thorsby. After going the distance with the eventual Regional Tournament winner, the Rebels won back-to-back games in convincing fashion.

Pitcher Lindsey Burnett was sensational in the first victory, a 2-0 shutout over Cold Springs High School. She gave up just three hits and three walks in the win, helping Thorsby advance to the next round in the loser’s bracket.

The Thorsby offense found its spark in the next game, once again collecting 15 hits in a 9-4 win over Luverne High School. Pitcher Makinley Turner turned in a solid performance from the mound, giving up just three earned runs while striking out 10 hitters in seven innings of action.

The win sent the Rebels to the loser’s bracket final, where they faced off against Lamar County for a trip to the State Tournament. It was Thorsby’s third game of the day on May 14, so if there was any fatigue it showed early as Lamar County jumped to an early 2-0 lead.

Thorsby fought back though, scoring three runs in the bottom of the third inning to take its only lead of the game, 3-2.

It was short-lived, however, as Lamar County struck back in the top of the fourth with two runs. They added four more in the fifth and seventh innings, finishing the game up 8-3.

Despite falling short, Thorsby has a lot to look forward to in the future. The team will be graduating just one starter, Madisyn Ellison. With most of its roster returning for next season, the Rebels will hope to build on the success of this year and go even further in 2022.