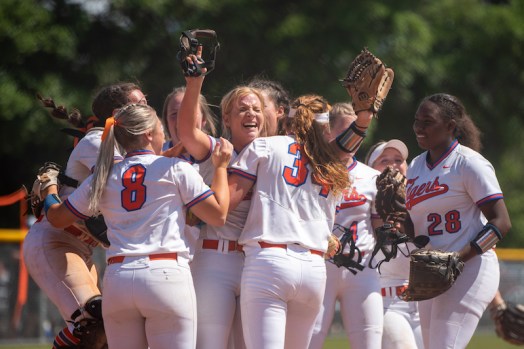 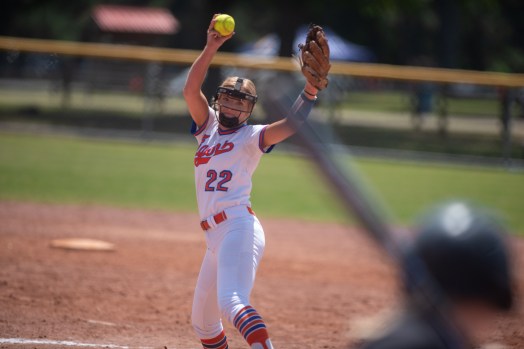 CCHS pitcher Emma Deason threw an amazing game against Helena. She gave up zero runs off three hits with two walks and three strikeouts in the 1-0 victory. (KEITH MCCOY/ ADVERTISER) 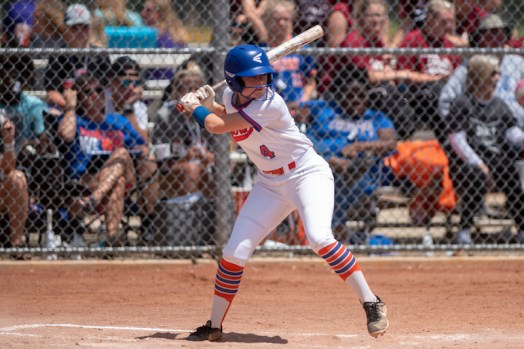 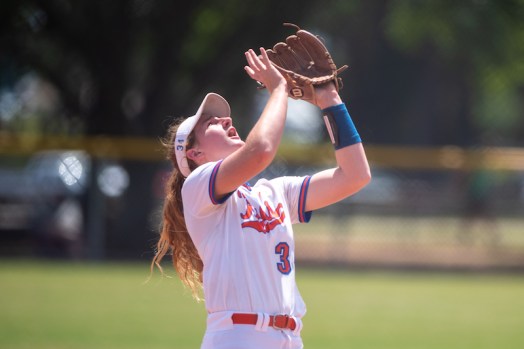 Marlie Giles holds out her glove waiting for a popped-up ball to fall. (KEITH MCCOY/ ADVERTISER) 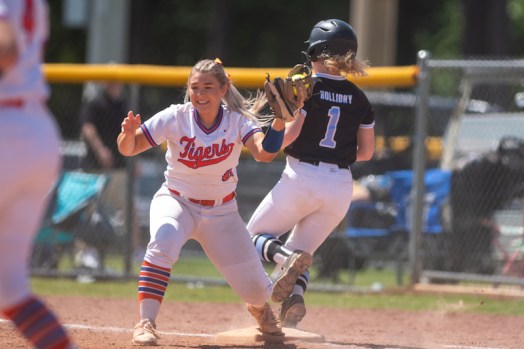 The Lady Tigers clinched their spot in the State Tournament on May 13 in impressive fashion.

After defeating Wetumpka High School and Hillcrest High School on May 12, CCHS entered the final day of the 6A Regional Tournament with a date against Helena High School, a team that had gone a perfect 4-0 against CCHS this season.

“They’ve dominated us all year, they beat us four times,” CCHS assistant coach Johnny Giles said. “They come out here thinking they were going to beat us I’m sure, I can’t blame them.”

This time, however, was different. In a season where the bats have helped carry the Lady Tigers to great heights, it was the pitching and defense that won the day.

Emma Deason started the game on the mound for CCHS and was sensational. The Junior threw a three-hit shutout, allowing only five total base runners in the game while striking out three hitters.

When Helena was able to break through against Deason and put runners in scoring position, the Lady Tigers defense stepped up. In one particular instance in the top of the fifth inning, Helena had runners on second and third base with one out. Hannah Steele, the runner on third, attempted to steal home on a ball that got away from the CCHS defense. However, the Lady Tigers defense was able to get the ball and cut Steele off, tagging her out. Deason followed that up by striking out Camryn Bailey to get CCHS out of the jam.

“We knew coming in our defense had to play well,” Giles said. “They played phenomenal. We knew our pitching had to come through, and Emma Deason was absolutely phenomenal.”

While Deason was fantastic, the pitcher on the other side, Bailey, was almost equally as fantastic.

Bailey pitched all seven innings for the Huskies. She only allowed four hits while striking out 10 batters. For Helena though, that was not enough.

It was in the sixth inning that the Lady Tigers offense finally broke through against Bailey. The inning began with Giles putting in Josie Cornell to pinch-hit. The eighth grader came up big, hitting a lead-off single to give some life to the CCHS dugout.

Chloe Shiers came in to pinch-run for Cornell and with Macey Pierce getting a base hit in the next at-bat, Shiers found herself at third base. Pierce was tagged out attempting to reach second base on the hit, but for the first time in the game, the Lady Tigers had a serious scoring threat.

With Marlie Giles up to bat, it seemed as though it was destined for CCHS to take the lead. It wasn’t Giles that did the heavy lifting in getting the run home for the Lady Tigers though, it was Helena catcher Bella Holliday.

On the first pitch, Bailey threw a ball in the dirt. Holliday had a chance to block it but the ball skipped past her, giving Shiers a window of opportunity to advance home for the run. Shiers broke for the plate, sprinting at top speed and slid home just in time to score the run, giving the Lady Tigers a 1-0 lead, one they would never surrender.

“I felt [in] the gut there to pull Josie Cornell, eighth grader, put her up there to lead off the bottom of the sixth,” said Giles. “[She] punches a hit up the middle and the rest is history … Of all things we score on a passed ball. Sometimes things just have to go your way.”

The victory won the 6A regional tournament for CCHS. Their season continues on May 21 as they kick off the State Tournament in Oxford against Hartselle High School.