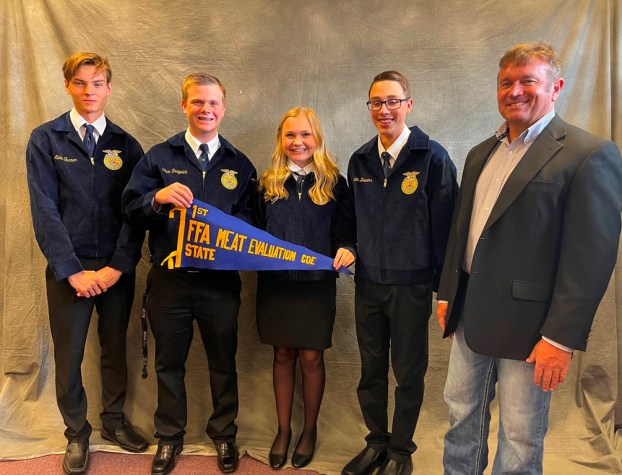 Thorsby FFA extended their win streak in the State Meats Evaluation Career Development Event to eight on May 6.

Through out the past decade, Thorsby FFA has earned many different achievements at the state and national level, however, one of the biggest accomplishments is their eighth straight state title in the Meat Evaluation CDE. Back in 2014 was the first time the program had won a state title, and it was the Meats Evaluation Team that achieved it. In the years following, they won many more state titles in other competitions, but the meats evaluation has always been one of them.

For their eighth win in a row, they won in dominant fashion with the first, second, third and fourth placed individuals, as well as beating the second place team by more than 200 points. The team members Aiden Turner, Cassie Knox, Ethan Traywick and Braden Deavers are excited to have the opportunity to compete at the national level, but will have some things to work on first.

“We have to get better at the parts that should be a perfect score,” Turner said. “Things like the cuts identification and the written exam.”

“We need to do more in-person work, more than just going over pictures,” Traywick said.

There are a few things done differently and some new things added at the national level that they will have to prepare for. While this means they will have more things to study, the team seemed excited to take on the challenge. Traywick said there is one new part he was not looking forward to, but will have to master it before the national competition.

“Batch is not something that I am excited about,” Traywick said. “They give you a scenario with a certain cost and how many pounds of meat there is, and you have to find the average of it all.”

While the team may not particularly enjoy doing some of the new parts of the competition, they are planning on being ready for anything presented to them. They will have until the FFA National Convention, in Indianapolis, Indiana on Oct. 27-30 to prepare.  The team expects to do well and is excited to test what they know against the rest of the country.

By ZACHARY SEIFTER/ Staff Writer   The Chilton County Commission voted to accept the city of Clanton’s to exit from the... read more