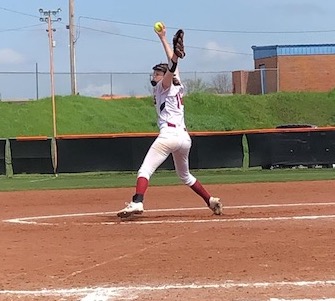 Maplesville’s Lexi Smith is the Chilton County Athlete of the week for her performance in the 1A Area 7 Tournament. Smith started the first game at pitcher, throwing five innings while giving up zero runs off two hits with one walk and seven strikeouts. She also went a combined 6-for-6 hitting the ball in the two wins over Billingsley High School.

The Chilton County Athlete of the Week for the week of April 30 through May 7 is Maplesville softball player Lexi Smith. This is Smith’s second time being named athlete of the week.

Smith had an excellent showing in the 1A Area 7 Softball Tournament on May 6. Her superb pitching performance, as well as some terrific hitting, helped Maplesville beat Billingsley twice to take the area crown and advance to the Regional Tournament in Tuscaloosa.

Smith pitched the first of the two games over Billingsley. She threw all five innings of the game, shutting out the Bears while giving up just two hits in the game. She also gave up just one walk while striking out seven batters.

While Smith dominated from the mound, she was perfect from the batter’s box. Smith went a combined 6-for-6 in the two wins over Billingsley. She also drew a walk and added an RBI to her stat sheet.

Burnett played a pivotal role in Thorsby winning the 2A Area 6 Softball Tournament on May 7 over Isabella High School. Not only did she take the win from the mound in the second game, but she was fantastic hitting the ball in the two wins over the Mustangs.

Burnett hit the ball well in Game One, going 2-for-4 with two RBIs in a 6-2 win for the Lady Rebels. However, she contributed largely to the offensive outburst that was Game Two.