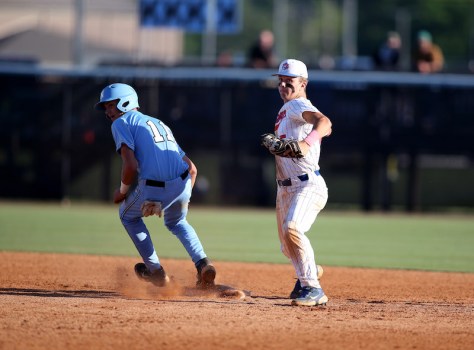 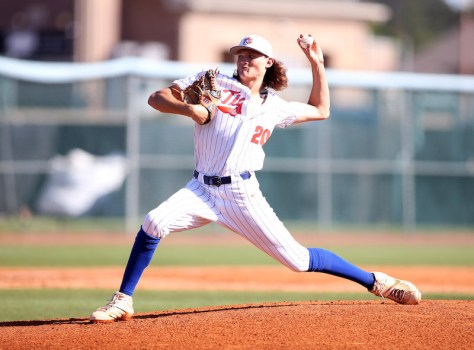 Chilton County's Pico Kohn on the hill for game one. 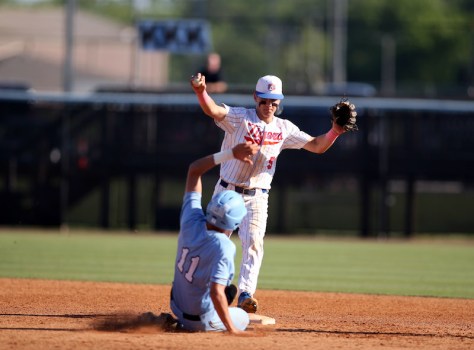 Chilton County's Eian Headley steps on second for the front side of a double play. (BRANDON SUMRALL/ ADVERTISER) 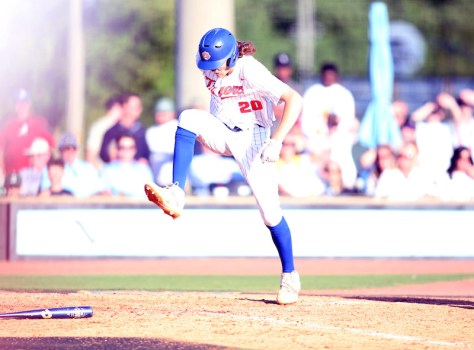 Chilton County's Pico Kohn on the hill for game one. (BRANDON SUMRALL/ ADVERTISER) 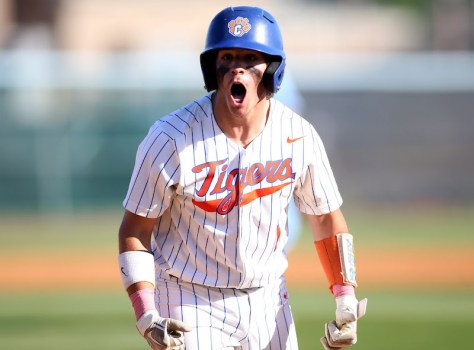 Chilton County's Cannon Miller gets his team mates pumped up after a single. (BRANDON SUMRALL/ ADVERTISER)

The Chilton County High School varsity baseball team was dealt a third round knock-out blow on May 7 at the hands of Northridge High as the Jaguars eliminated the Tigers in round three of the AHSAA 6A State High School baseball playoffs, 8-1 and 6-1.

Game one of the series proved to be a pitching duel with both teams calling on their aces as Chilton County’s Pico Kohn faced off with Northridge High’s Tate Robertson. Four innings of shutout baseball ensued along with a number of stranded base runners before the bottom half of the fifth inning would see the game’s first run. A leadoff walk to Brady McAbee followed by a single from Paul Reid set up a RBI single by Jones Colgrove that gave the Jaguars a 1-0 lead.

The lead was short lived however as a two-out laser by Kohn over the right field wall tied the score at one each with action moving to the top of the sixth.

The home half of the inning proved to be the Tigers undoing however as three errors, a walk, and a hit batter would aid heavily in a seven run inning for the home team that put Northridge way out in front, 8-1.

A three up and three down top of the seventh gave the Jaguars the game one win, 8-1.

Kohn pitched a complete game for Chilton allowing 5 earned runs on 7 hits with 3 walks and 5 strikeouts while also leading at the plate with a 2 for 3 performance with a single, homerun and a RBI.

Brady Bolling and Bodie Vail faced off on the hill to start game two with each pitcher making short work of the opposing lineup through the first inning. A two out walk to Paul Reid in the second did little to help the Jaguars while a three up and three down inning for Chilton sent action to the third with no runs for either team on the board.

A three up and three down top of the third gave way to the bottom side of the inning where Kohn led off with a double. With singles by Katon Elijah and Eian Headley, a pair of walks to Sam Smith and Bolling pushed Kohn across the plate while giving the Tigers an early 1-0 lead.

The top of the fourth inning saw Northridge draw even thanks to a one out single by Whitt Winfield that set up a RBI walk that made it a one all game. A three up and three down home half of the fourth set the game to the fifth with the teams tied at one.

Northridge stranded a pair of base runners through the top half fifth with Chilton doing the same during the bottom half of the inning seeing the Tigers load the bases with only one out but would come away empty handed after a pair of infield outs.

A big sixth inning for the Jaguars got started with a leadoff solo shot by Davis Randolph that would be followed by a pair of Chilton County errors that set up a pair of RBI doubles by William Ingram and James Brazil that gave Northridge a 4-1 lead. A three up and three down home side of the inning moved action to the top of the seventh with Chilton trailing by three.

Three Tiger errors in the seventh saw the Jaguars plate two more runs in the half inning while Chilton would face a five run deficit with only three outs remaining. A pair of strikeouts to start the inning by Vail proceeded a pop up to Colgrove at short that would be hauled in for the game’s final out to secure a win for the Jaguars while bringing an end to the 2021 season for the Tigers.

Bolling pitched 6 complete innings for the Tigers while allowing 2 earned runs on 5 hits with 4 walks and a strike out.

Chilton County ends the season with a final tally of 21 wins with 15 losses on the season and a trip to the elite 8 of the AHSAA 6A State Playoffs.