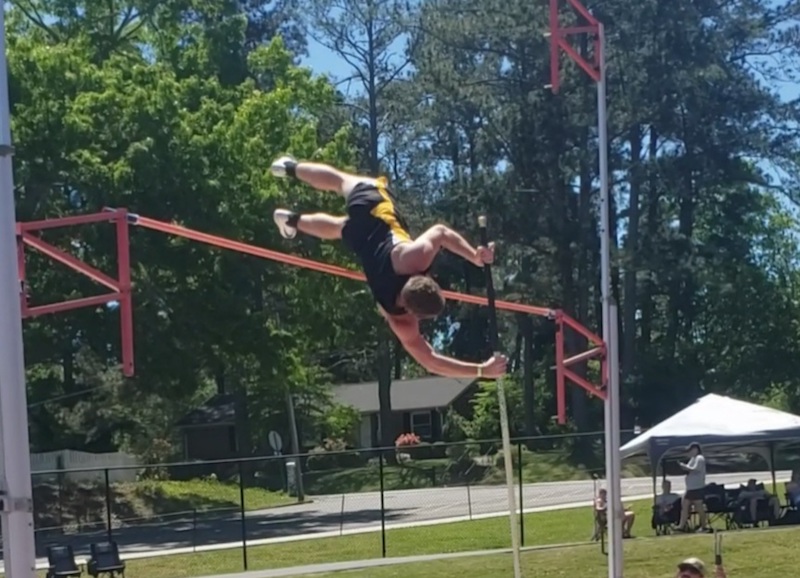 Isabella’s Ben Martin set the school record in the 2A Boys Pole Vault with a jump of 10 feet and nine inches. The jump won him the state title. (LANDON MIMS/ CONTRIBUTED)

Isabella’s Ben Martin, however, was able to bring home a gold medal and a state title.

Martin competed in the 2A Boys Pole Vault and recorded a new school record of 10 feet and nine inches. The new record was good enough to win Martin the title.

“All year he wanted to get the school record,” Isabella track coach Landon Mims said. “He knew that if he could get that then it would give him a good chance to get the state title. That’s what wound up happening for him.”

While Martin and Littleton were the only two Isabella athletes to bring home medals, Isabella was able to send five of its 12 runners on the team to the state track meet, an incredible accomplishment for the squad.

“Five kids qualifying for state out of 12 total I thought was awesome,” Mims said. “That’s [almost] half the team qualifying and there are some teams around that nobody goes to state.”

The other runners from Isabella that qualified for the state meet were Phillip Williams, DeAsia Wilson and Kenna Tuttle.

Only two members of the team were seniors. With 10 runners coming back, as well as any that might be added to the team next year, there is an excitement brewing over what could come in the team’s future.

“I look forward to next year, having everybody back.” Mims said.

Returning almost the whole squad will bode well for Isabella. It could also possibly mean more than just one state title.