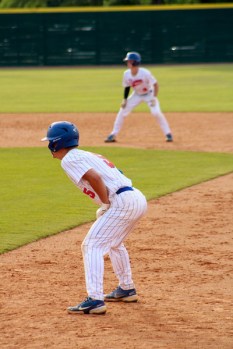 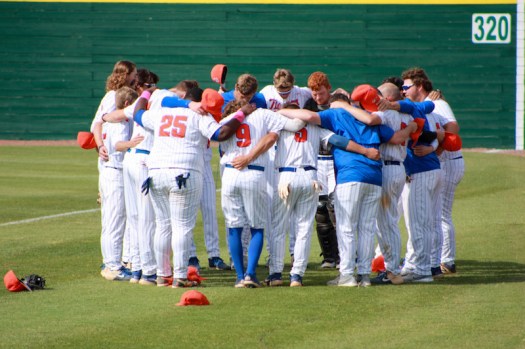 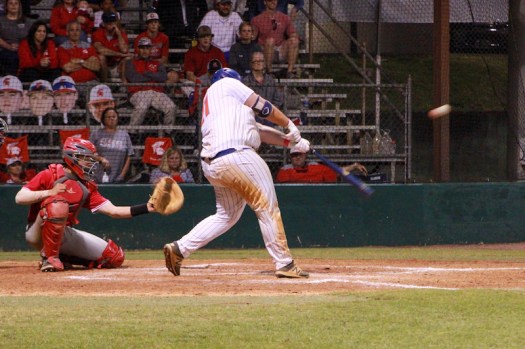 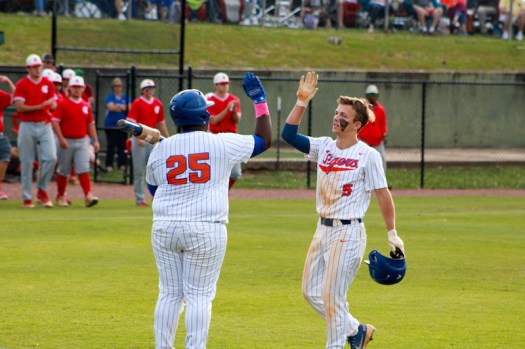 Eian Headley and Deuntae Childers high five in the middle of a game against Saraland High School. (KRISTIN WILSON/ SPECIAL) 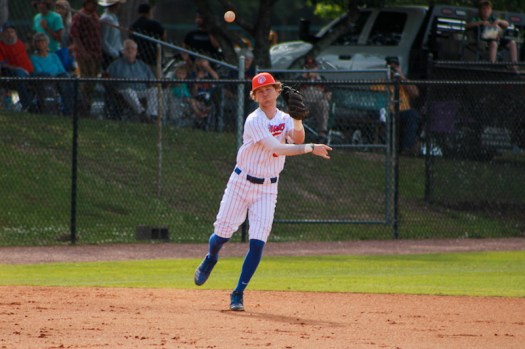 The Chilton County High School baseball team defeated Saraland High School twice in three games on April 30 and May 1 to advance to the third round of the state playoffs.

The Tigers rode stellar performances from Pico Kohn and Brady Bolling in the Game One and Game Three wins.

Kohn did much of the heavy lifting for the Tigers in the early portion of the first game. Through four innings, CCHS was unable to score a run. Kohn kept the game close though, giving up just one run through those four innings. However, in the fifth inning, the CCHS offense broke out.

Down 1-0, Cole Tignor led the bottom of the fifth inning with a walk. Two of the next three batters walked as well, loading the bases with one out. Two more walks by Deuntae Childers and Cannon Miller, along with a single by Bolling, brought three runs across the plate to give CCHS a 3-1 lead. The Tigers scored four more in the sixth to cap off the victory.

“We battled their lefty early, got in some situations where we came through” CCHS head coach Ryan Ellison said. “[We] got him out of the game, and once they put in their bullpen, we started getting to them and having some timely hits in some big situations.

The offensive breakout carried over into Game Two. CCHS started the game hot, scoring four runs in the first three innings to take a 4-0 lead. After that though, the offense went dry as they did not score again the rest of the game.

Saraland didn’t hesitate to take advantage of the Tigers’ inability to score. The Spartans scored eight runs over the next four innings, including four in the fifth inning, to take Game Two by a score of 8-4.

“We came out with great intensity just like we did in Game One” Ellison said. “Our guys came out hot. They hit the ball, they got on base, they hit some runners in, and we went up by four … We had a few costly errors that put them into some situations where they scored some runs. Then they had a guy that came in from the bullpen who shut us down. He was a really good arm for them … We battled and tried to find ways back but they kept getting out of it.”

Saraland was unable to replicate their Game Two offensive performance the next day in Game Three. After CCHS jumped out to a 1-0 lead in the first inning off an RBI double by Childers, Bolling shutout the Spartans offense. Bolling threw all seven innings in the game, giving up just three hits and two walks while striking out four batters to clinch the series for the Tigers.

“Brady pitched an extraordinary game,” Ellison said. “Just lights out on the mound, and we played well behind him.”

CCHS hits the field for round three on May 7. The Tigers will face off against Northridge High School in Tuscaloosa, with the winner advancing to the Final Four.