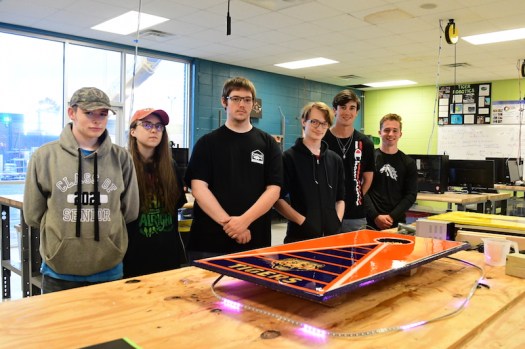 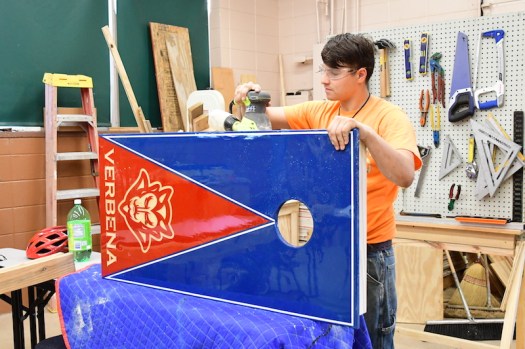 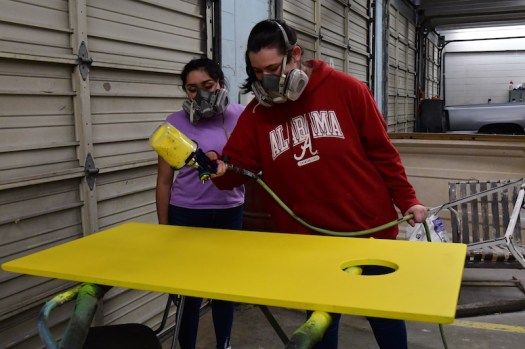 Leticia Meza and Kayla Duncan demonstrate how they painted the wood boards for the cornhole project. (JOYANNA LOVE/ ADVERTISER) 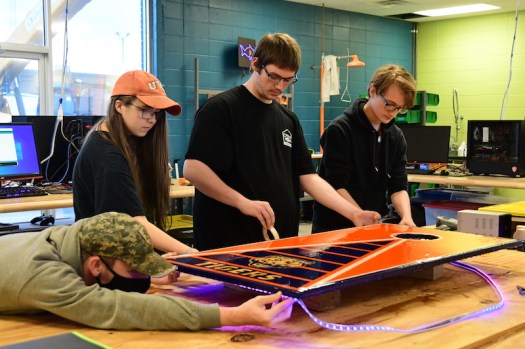 “We all turned in ideas of what we wanted to do, and this is the one that wound up getting picked,” Micah Drinkard said. “I designed the Isabella one with the vectoring of the art.”

He said each student in the class got to work on the design for their high school.

He compared the project to how different departments in a company would focus on different components of the product.

Maryanna Warner said the team collected electronic images of each of the high schools’ team logos, then put them through a computer program to convert it to a vector image that the Computer Numerical Control router would use to know where to cut.

She said “learning to use the different types of software” was her favorite part of the project.

Aligning the router correctly was a bit challenging.

Leticia Mez, an automotive body and paint repair student, worked on sanding the pieces and painting on the primer. She said they had to mix the colors to get the right shade for each of the school colors. These colors determined whether a light or dark colored primer would be used.

Classmate Kayla Duncan said she enjoyed “the learning experience of working with wood instead of metal and plastic,” which the students usually work with in the class.

The wood is more sensitive to sanding than metal, so the students had to be especially careful not to sand too much on any one part of the project.

Construction student Michael Carden also enjoyed the opportunities in the project to gain more experience building and learning to build something new.

He said the project is an example of the good work that LeCroy students can do and that “people can trust us to do what they need done.”

“All of the different classes up here enjoy working together and combining efforts to make projects and get the learning experiences working with other fields and other trades,” construction instructor Robert Pittman said.

After construction students assembled the cornhole game, STEM Academy students then added sensors and lights, so that when someone throws the bean bag through the hole it lights up.

Quinn Jackson was a part of the team working on the electrical and programming for the lighting and sensors in the cornhole game.

“The sensors are kind of a challenge because the way it was going to work was if you play the game and you score, it would do something — make a noise, change the lights,” Jackson said. “That was a big challenge.”

The sensors have to be calibrated just right, so that they pick up the bean bag but not too sensitive to respond to other movement.

“One of the issues that we ran into with the sensors was that the bean bags can go through the sensor (without being detected) if they are going too fast,” Hunter Hayes said.

STEM Academy student Ben Martin said he was part of developing the mock business and marketing plans for the product as a part of the simulated workforce model followed at LCTC. Such plans are also required when teams go to competition.

He said the marketing plan included word of mouth and promotion in Facebook groups connected to Chilton County.

Martin said he has enjoyed seeing the finished product some together.

“Seeing a finished product like that it is really rewarding,” Martin said.

Drinkard agreed, and said he also enjoyed seeing the CNC router cut out the designs.

“That made the boards look great,” Drinkard said.

The plan is for students to continue the project next year and complete a set for each school.