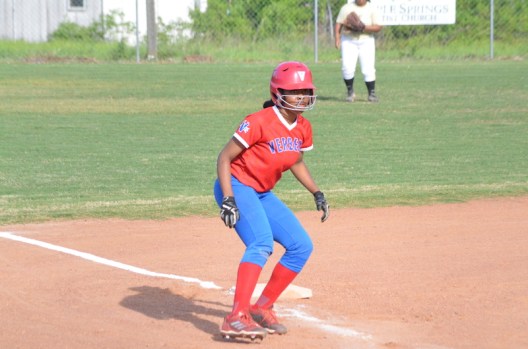 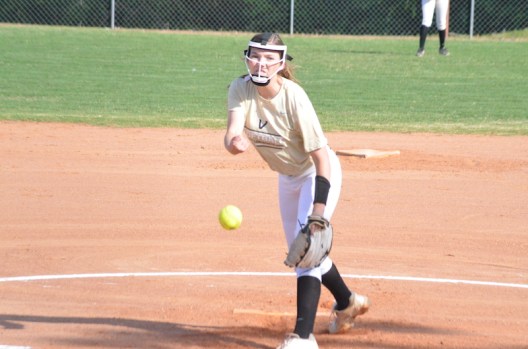 Vincent pitcher Madelyn Walker pitched a good game in the loss to Verbena. She gave up three runs in six innings pitched off five hits with zero walks and 10 strikeouts. (ZACHARY SEIFTER/ ADVERTISER) 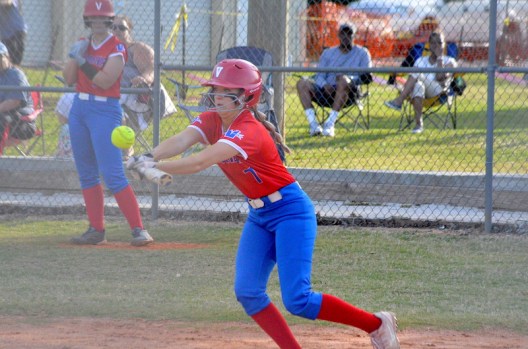 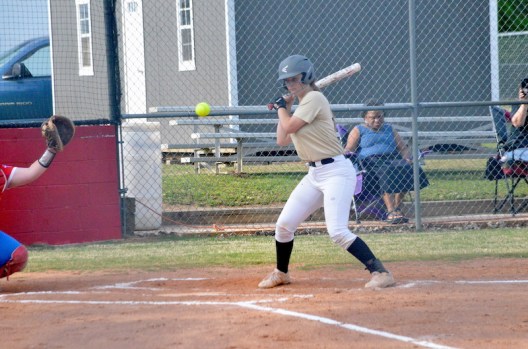 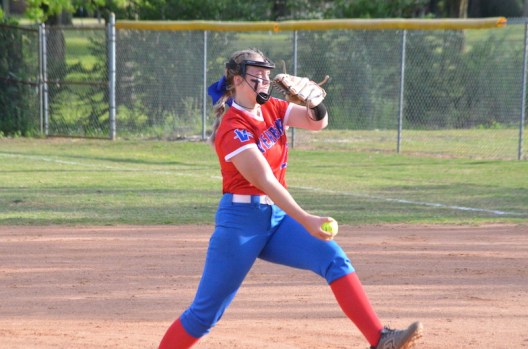 Verbena pitcher Jaycee Quinn was excellent in the win over Vincent. The freshman threw all seven innings, giving up just one run off five hits with five walks and 11 strikeouts. (ZACHARY SEIFTER/ ADVERTISER)

The Verbena High School softball team won a big game over Vincent High School at home on April 26. Despite Vincent’s 21-8 record coming into the game, as well as its 2A status, Verbena was able to pull off a 3-1 victory behind a strong game by pitcher Jaycee Quinn.

The game began with both teams going scoreless in the first inning. Both Quinn and Vincent pitcher Madelyn Walker allowed just one base runner each in the inning, and both got out of the inning easily.

After another quick outing in the second for Quinn, Verbena’s offense was able to get on the board first. Singles by Elizabeth Shiver and Laliah Benjamin got runners on base for Verbena. An error on a ball hit by Paris Battle allowed Lydia Edwards, who was pinch-running for Shiver, to get home, giving Verbena a 1-0 lead.

Neither pitcher yielded any runs for some time after that. Quinn collected five strikeouts over the next three innings, allowing just five runners to reach base in the same timeframe.

Walker was equally as dominant in the third and fourth innings, shutting down the Verbena offense after giving up the single run. In the bottom of the fifth though, Verbena’s offense struck again.

It took the Red Devils very little time to form a threat in the bottom of the fifth. Madison Bryant and Macey Kelley began the inning with singles, giving Verbena a runner in scoring position before Vincent could record an out. A Kiara Ray single was able to get Bryant home, extending Verbena’s lead to two runs. Ray’s excellent base running was what it took to get Verbena’s lead to three.

Kelley stood at third base while Ray was at first with one out. Early in the next at-bat to Meagan Shiver, Ray took off for second base, trying to steal. On the throw to second though, Kelley ran home from third base, scoring easily as the throw to second gave her plenty of time to reach home plate. The smart base-running gave Verbena its last run of the game, putting the Red Devils up 3-0.

“We’re learning how to play… small ball,” Verbena head coach Allen Brothers said. “I’ve coached baseball for 15 years, and now I’m taking that approach to, you bunt, you move base-to-base, and against a good team you get a chance for a good break and score a run or two.”

The small ball approach worked to perfection for Verbena as the three runs they scored were all Quinn needed as she ran through the sixth and seventh innings. She was a bit shaky in the seventh, giving up her only run of the game, but she finished strong, finishing off the Vincent offense to secure the 3-1 victory for Vebena.

“Everything was working for her [Quinn] today,” Brothers said. “That’s been some of her growth as a ninth grader, just figuring out some days some pitches work, some days they don’t. Today it seemed like all of her pitches were doing well. When she gets in a rhythm to where she can get the rise ball working, it makes her a complete pitcher.”

Quinn was the winning pitcher in the game, throwing all seven innings for the Red Devils. She gave up just one run in those innings off five hits with five walks and 11 strikeouts.

Walker meanwhile, took the loss on the mound for Vincent. She pitched six innings, giving up three runs off five hits with zero walks and 10 strikeouts.