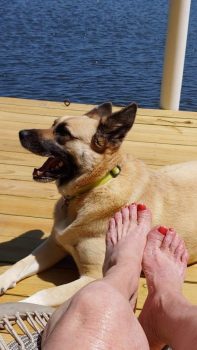 A dog enjoys the sunshine at Lake Mitchell with his owner. (CONTRIBUTED) 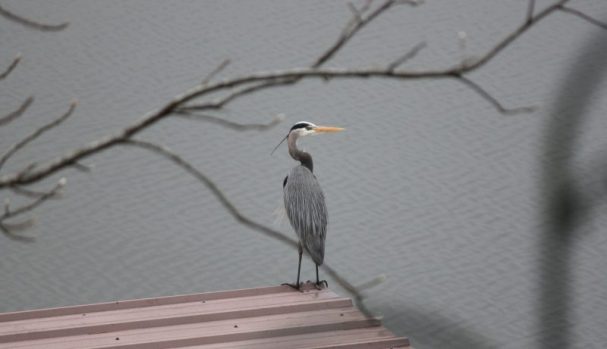 Blackberry winter they say is here. What is it exactly? I’m told it is a Southern term used to describe a period of cold weather that coincides with the time the blackberries are in full bloom. Typically, this is early May. There are blackberries blooming along the back dirt roads on the way to Lake Mitchell now, and we are having a brief cold spell so we believe Blackberry Winter arrived early this year.

There have been beautiful spring days with a few highs in the 80s that brought people and their boats out on the water. A few brave wake boarders and lots of fishermen have been spotted. Then, the cool spell in the low 40s comes along and runs everyone indoors with exceptions of a few who just won’t give in to the cool. Dogs don’t mind the cold when they can bask in the sun with the master’s feet resting upon her back. So, never mind the cold snap just find a place in the sun and warm your paws.

The birds are looking for warmth too or maybe a fish for breakfast. A gorgeous Great Blue Heron stayed atop the boathouse for over an hour. You might call it a brisk windy day when you spot feathers of a very large bird blowing in the wind.

A few days later four Eagles came into the same area. They were low into the tree tops. Were they looking for a warm place to perch in the sun or had they spotted the grey cat nearby and thought they had found an easy breakfast? They definitely were not soaring high in the sky as they usually are but three were diving toward the ground while one sat high in the tree top. That is until the dog began to run around and bark. She was not sure what had invaded her world. She was not in any danger but may have saved a cat’s life. Abby Cat still has nine lives left thanks to a dog named Hope.